Iran Not to Bow to US, Allies: Top General 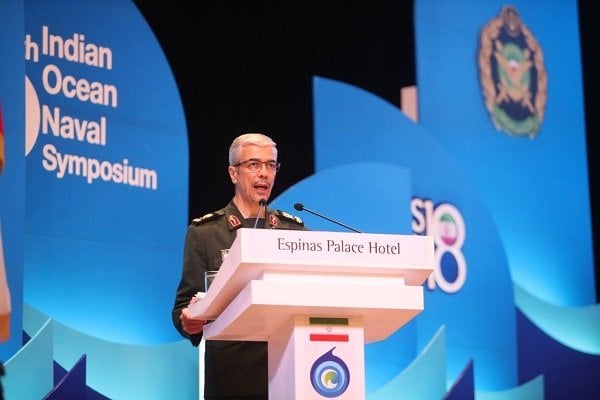 Major General Mohammad Baqeri, the chief of the General Staff of the Iranian Armed Forces, says the country will never kowtow to the United States and its allies.

Geral Baqeri says the traditional bipolar system in the world has collapsed and new powers have emerged in the East and the West.

“Of course, certain powers and regional players have closed their eyes to the realities in the modern world, and unfortunately no region in the world is safe from blows,” said the top general in an address to the Indian Ocean Naval Symposium, commonly known as IONS, which opened in Tehran on Monday, April 23.

He also lashed out at the White House for contributing to disorder in the world, a Farsi report by Fars News Agency said.

“The US and certain other powers send military units to different locations and promote chaos in the world by using the language of force,” said the senior commander.

“By supporting the ISIS terror group, the US has plunged a large part of West Asia into crisis, setting the scene for [the] displacement [of people] and killing,” he said.

General Baqeri also described the recent air attack on Syria by the United States and its allies as a clear example of “illegal behaviour.”

“They export weapons to different countries, including Saudi Arabia, preparing the ground for war,” he said.

Elsewhere in his remarks, the top commander said the special features of the Indian Ocean has made it an influential region whose sphere of influence goes beyond the region.

“Any changes to the Indian Ocean’s security situation has a direct link to security in other parts of the world,” the top commander underlined.

He also underscored that the Armed Forces of the Islamic Republic of Iran, as a leading country in the war on terror, are prepared to share their experience with other countries.

He said the Iranian Navy has dispatched 51 flotillas of warships to the Indian Ocean to deal with pirates and marine insecurity.

“This comes as the massive presence of military units of some major powers and their interference in the Indian Ocean region triggers insecurity, a clear example of which is the large-scale bombardment of Yemeni people,” he said.