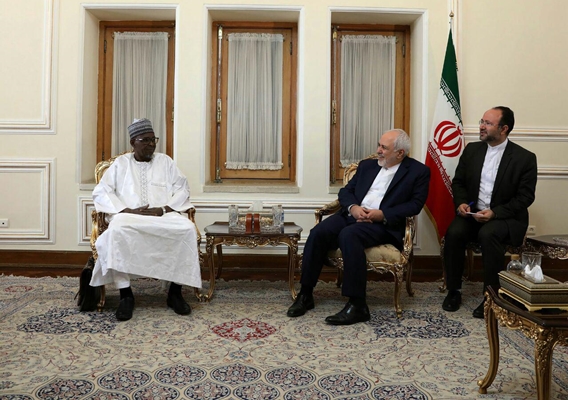 Iranian Foreign Minister Mohammad Javad Zarif has discussed issues of mutual interest with Vice-President of the Nigerien National Assembly along with members of Niger-Iran Parliamentary Friendship Group at the African country’s legislature.

During the Monday meeting in Tehran, FM Zarif pointed to the important position of relations with African countries in Iran’s foreign policy, and highlighted the good and friendly relations of the Islamic Republic with Niger.

“There are many areas for expansion of relations and cooperation between the two countries, and it is imperative that the governments and parliaments of the two countries make more efforts in this regard,” he said.

“There is also good ground for cooperation between the private sectors of the two countries, and they can play an important role in expanding ties,” FM Zarif said.

The Vice-President of Niger’s National Assembly, in turn, gave a report on his trip to Iran and expressed sympathy with the government, parliament and people of Niger on the recent flood in Iran and the damages caused by it.

He also described Iranians as energetic, warm and hospitable people, and expressed his satisfaction over the fact that the two countries’ parliamentary friendship group has been able to take steps to develop ties with the Islamic Republic in the field of telecommunications, as well as academic, political and parliamentary  relations between Tehran and Niamey.