Iran’s Foreign Minister Mohammad Javad Zarif has held talks on a range of issues with André Haspels, the director general for political affairs at the Dutch Ministry of Foreign Affairs, in Tehran.

During the Tuesday meeting, the two sides discussed the latest developments in bilateral relations, including the expansion of economic cooperation, and regional developments, particularly the situation in Syria and Yemen.

The two sides also conferred on the Iran nuclear deal, officially known as the Joint Comprehensive Plan of Action (JCPOA).

During their Tuesday meeting in Tehran, Araqchi and Haspels talked about various bilateral, regional and international issues.

The Iranian official welcomed the Dutch government’s support for preservation and implementation of the nuclear deal, as well as the Netherlands’ position on standing against the US unilateralism and trans-national laws. 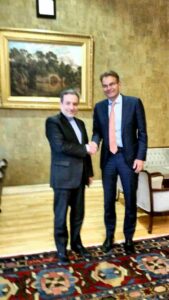 “With its unilateral and illegal withdrawal from the nuclear accord, the United States has violated the UN Security Council’s resolution, and encourages or even forces others to violate it as well. If the deal known as the JCPOA fails, it means the diplomacy has failed, while bullying takes over the international arena. This will definitely add to the political complexities in the Middle East,” stated Araqchi.

The Iranian diplomat outlined the regional policies of Iran, saying that Tehran’s policy, unlike those of some other countries in the region who have been struggling with various political tensions in the region, is to maintain stability and expand security in the region.
He added that the Islamic Republic has therefore fought ISIS as the most important factor in the region’s instability.

For his part, the Dutch official noted that the Netherlands supports the JCPOA as a member of the European Union and a non-permanent member of the Security Council.
Haspels further mentioned that his country pursues the implementation of a banking mechanism with Iran in order to provide the Islamic Republic with the benefits of the nuclear agreement.

He also offered his condolences over the recent terrorist attack in the southern Iranian city of Ahvaz and condemned the act. The Dutch diplomat also appreciated Iran’s important role in fight against ISIS.