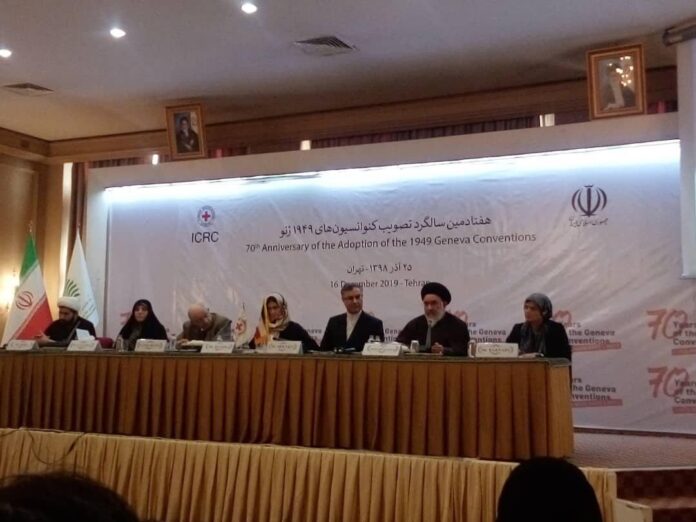 A meeting has been held in Tehran on December 16 to mark the 70th anniversary of adoption of the four Geneva Conventions back in 1949, attended by Iranian and foreign guests, including the diplomatic officials residing in Tehran, as well as the military and administrative authorities.

In an address to the meeting, Iranian Deputy Foreign Minister Seyyed Mohammad Kazem Sajjadpoor, who is also president of the Institute for Political and International Studies of the Ministry of Foreign Affairs, highlighted the significance of implementation of the humanitarian law, particularly under the current circumstances in the world and the Middle East.

He also noted that the illegal sanctions imposed by the United States have obstructed the delivery of humanitarian and emergency aids, particularly the pharmaceutical items and medical equipment.

In separate comments, Head of the International Committee of the Red Cross Mission in Tehran, Reto Adrian Stocker, stressed the need for peace-building and multilateral mechanisms in the wars and the need for implementing the humanitarian law in the conflicts, such as the eight-year war between Iran and Iraq.

Elsewhere in the meeting, an expert panel discussion was held with five speakers.

One of the speakers was Iranian MP Owladqobad, who emphasized the necessity of implementing and enforcing the four Geneva Conventions of 1949, and refraining from the imposition of restricting measures and sanctions on the delivery and supply of humanitarian assistance.

Iranian cleric Hadi, deputy chairman of the Iranian Judiciary’s Department on Passing Bills and Regulations, stressed the need for the criminalization of violation of humanitarian law in the national law and filling the legal vacuum.

In another speech, Fiona Barnaby, regional legal adviser of the ICRC, expounded on the conditions of the armed conflicts, and highlighted the importance of humanitarian conduct, even during the wars, and the proper treatment of the prisoners of war.

Finally, Ayatollah Seyyed Mostafa Muhaqqiq-Damad clarified Islam’s view about the humanitarian law, explicated the law of war from the viewpoint of Islam, and underlined that the conducts and measures of a certain group of so-called Muslims should not be linked to Islam and Muslims.

Islam has been always the religion of peace and friendship, and believes that the human being’s benefit relies on the existence of peace, the cleric added, stressing that the human society’s priority must be to prevent the wars and violation of peace.

The event marking the 70th anniversary of adoption of the four Geneva Conventions of 1949 concluded with questions from the audience and answers from the speakers.