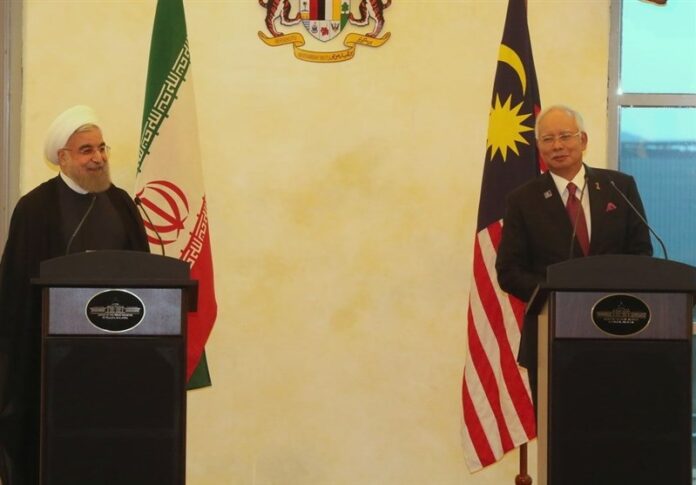 Speaking at a joint press conference with Malaysian Prime Minister Najib Razak in Kuala Lumpur on Friday, President Rouhani urged the Southeast Asian country to invest in Iran in the post-JCPOA and post-sanctions era.

“Iran supports investment by Malaysian companies in the oil, gas and petrochemical sectors,” he added,

According to President Rouhani, the two sides decided today to restore the volume of bilateral trade ties to the pre-sanctions level in the first step and double it immediately afterwards.

The Iranian president underlined intensifying the efforts to stimulate the two countries’ banking ties, and called for collaboration with Malaysia in the Halal food industry, academic and technological fields and tourism industry.

As regards the other subjects discussed in the meeting with Razak, President Rouhani pointed to mutual concerns about conflicts provoked in the Islamic world by foreigners and the threat of terrorism.

Heading a political and economic delegation, President Rouhani embarked on a tour of Southeast Asia on Wednesday that first took him to Vietnam.

He will later fly to Thailand to attend the 2nd Asia Cooperation Dialogue (ACD) Summit.