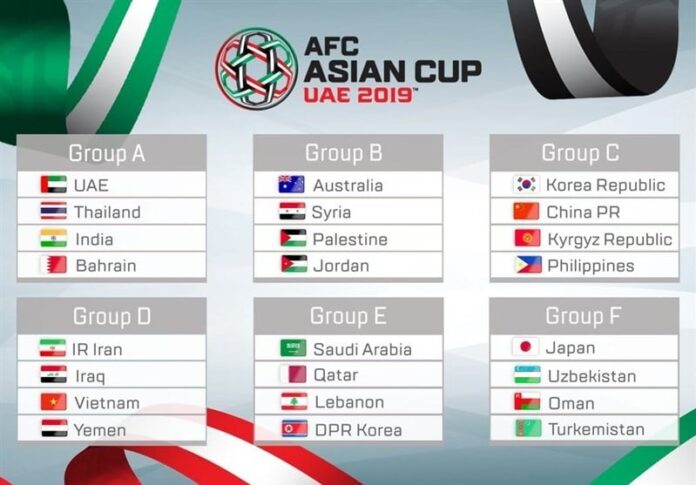 In a grand spectacle at the United Arab Emirates Burj Khalifa, host UAE, who was positioned in first place in Group A, will kick-off Asia’s most prestigious tournament against Bahrain at the Zayed Sports City Stadium in Abu Dhabi on January 5, 2019.

The host nation will be looking to improve on its second place finish the last time the competition was held in the UAE in 1996, but will face formidable opponents in India and Thailand who complete the cast in Group A.

Meanwhile defending champion Australia was drawn in Group B with 2004 and 2011 quarter-finalist Jordan, Palestine, and Syria, who return to the competition following their absence in Australia 2015.

Continent powerhouse and 2015 finalist Korea Republic, who is on the hunt for its first title since 1960, was drawn in Group C with two-time runner-up China PR as well as two debutants in the UAE 2019 – Kyrgyz Republic and Philippines.

Asia’s best ranked side, Islamic of Republic of Iran who is looking to secure its fourth title and its first since 1976, has been drawn in Group D alongside 2007 winner Iraq, Vietnam and Yemen, who will be appearing in its first tournament since its unification.

In Group E, two-time champion Saudi Arabia was drawn with 2011 host Qatar, Lebanon, who will be returning to the competition for only the second time after a 19 year absence as well as DPR Korea.

The tournament’s most successful side with four titles, Japan is in Group F and will face Uzbekistan, who has progressed past the group stage for the last four editions of the competition as well as Oman and Turkmenistan.

The Zayed Sports City Stadium will also host the final on February 1, 2019 after 28 days of enthralling action with the Mohammed Bin Zayed Stadium and Al Nahyan Stadium hosting the remaining matches in Abu Dhabi.