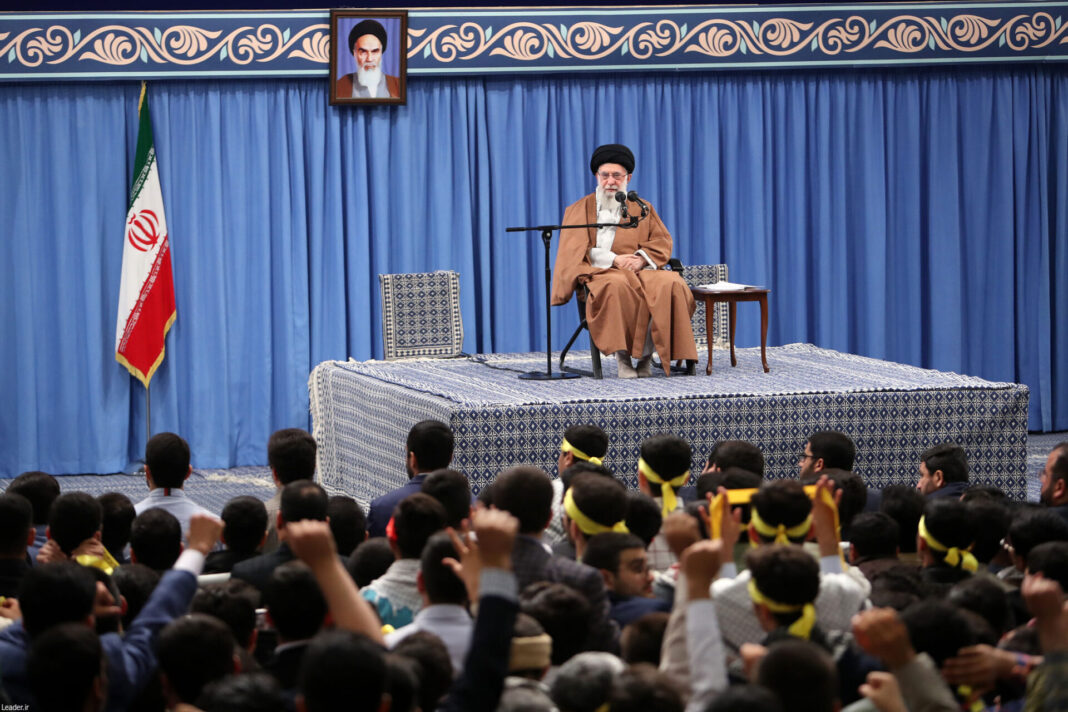 Leader of Iran’s Islamic Revolution Ayatollah Seyyed Ali Khamenei has reiterated the futility of talks with the US, calling on the Iranian officials to learn from the experiences of Cuba and North Korea who did not see any relief from American sanctions after interaction with Washington.

In an address to a gathering of Iranian students in Tehran on Sunday, Ayatollah Khamenei underscored that entering negotiations with the US government will not settle any problem.

The Leader then highlighted the experience of Cuba and North Korea in the talks with the US, saying the American and North Korean authorities took photos together and gave each other the highest compliment, but the White House did not ease the sanctions against Pyongyang a bit afterwards.

“They (Americans) are like this (in the negotiations). They say we would bring you (Iran) to your knees, and they do not make any concessions ultimately,” Ayatollah Khamenei warned.

Iran decided to give the US another chance by urging Washington to correct its mistakes, to lift the sanctions, to return to the Joint Comprehensive Plan of Action (JCPOA), and to attend talks within the framework of the JCPOA, but the US declined the offer, Ayatollah Khamenei added, saying it was a strategy to test the US and prove the US’ intentions to the world.

The US government’s demands have no limits, the Leader noted, stressing that Iran will never agree on them.

The US wants Iran to stay out of the region, to stop supporting the axis of resistance, and to scrap its missiles, and will gradually urge the Islamic Republic to become lax in enforcing the laws on hijab, Ayatollah Khamenei warned.

The Leader then touched on France’s efforts to mediate between Iran and the US, saying French President Emmanuel Macron who claims that a single meeting with the US president would solve all of Iran’s problems is either “very naïve or an accomplice of the US.”

Ayatollah Khamenei then asked the Iranian official not to wait for the French president to address the problems, saying such limbo would plunge the country into depression.

“The key to resolving the country’s economic problems is production. This is what the economists say. There is no other option. It is not possible to wait for the foreigners to settle the country’s problems. Such a wait harms the country’s progress,” the Leader underlined.

Ayatollah Khamenei emphasized that it would be meaningless to keep waiting for the plans of the US or French presidents on the JCPOA.

The Leader then asked the Iranian administration to stop pinning hopes on the foreigners, but not to sever contacts with them, and to rely on the internal capacities instead of waiting for the foreigners.

Ayatollah Khamenei noted that Tehran’s main response to Washington’s hostile plots has been to prevent the US government from making inroads into the Islamic Republic.

The Islamic Revolution has been based upon countering the US, as the slogans that demonstrators chanted during the Revolution were anti-American ones, he added.

Since the 1979 Revolution in Iran, the US has resorted to every measure to harm the Iranian nation, such as plotting coups, provoking anti-Iranian moves and separatist movement, and blockades, the Leader deplored.

Ayatollah Khamenei emphasized that Iran has not stood idle in the face of the US and has sent the enemy to the “corner of the ring” in the fight.

“But the Islamic Republic’s most important response to the US plots has been that it has blocked the US’ way for renewed arrival and infiltration into the country,” the Leader underlined.

Ayatollah Khamenei also decried the attempts at distorting history, saying while some claim that the takeover of the den of espionage (US embassy) in Tehran triggered the conflicts between Iran and the US, such struggle dates back to before the 1953 coup, orchestrated by the US government.

The US government has not changed over the past decades and has maintained the same “wolfish characteristics”, evil attitudes, and tendency to be a global dictator as of today, the Leader added.

Ayatollah Khamenei concluded that the US has become weaker, but at the same time wilder and ruder, compared to the past.

Every year in early November, the Iranian students mark the anniversary of the takeover of the American embassy.