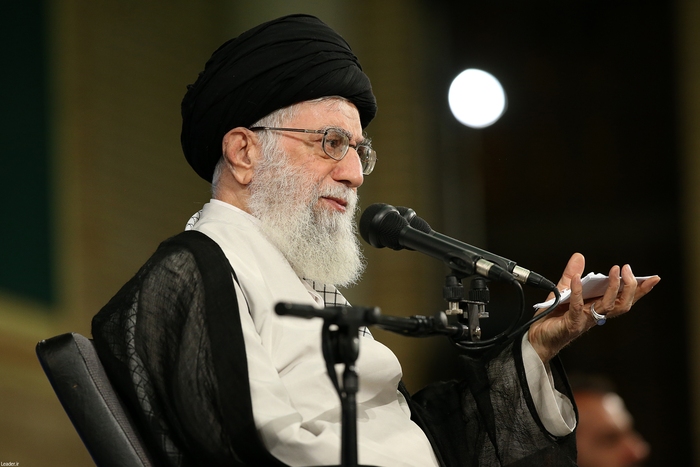 Leader of Iran's Islamic Revolution Ayatollah Seyyed Ali Khamenei says the conditions he had set for the country's ratification of the Joint Comprehensive Plan of Action (JCPOA) in 2015 were not met, and he did not approve of the way it was handled.

The Leader made the remarks in a Wednesday meeting with a group of university students in Tehran, responding to a question regarding his role in the ratification of the landmark deal.

“It was said during the talks that the ratification of the JCPOA has been attributed to the Leader. You can see and hear and can observe everything,” he noted.

“Read the letter regarding the JCPOA and the conditions set for its ratification. But if these conditions were not met, the Leader is not in charge of intervention,” the Leader went on to say.

Ayatollah Khamenei stressed that the Leader’s role does not include intervention in executive affairs unless the entirety of the Islamic Revolution is at risk.

“I believe that the Leader should not meddle in executive affairs unless there is a risk that the entirety of the Revolution’s movement is endangered,” he added.

He said he did not approve of the JCPOA but allowed for the negotiations between the government of Hassan Rouhani and the P5+1 group of countries.

“But the way the JCPOA was handled, I did not really believe in it, and mentioned this to the president and the foreign minister and had warned them several times,” he added.

Iran and the five permanent members of the UN Security Council – the United States, Britain, France, China and Russia – plus Germany finalized the text of the JCPOA over Iran’s nuclear program in the Austrian capital of Vienna in July 2015.

Later in October, the Iranian Parliament and the Guardian Council passed the bill that allowed the administration to implement the nuclear deal.

According to the bill, the Iranian administration was allowed to voluntarily implement the JCPOA under certain conditions.

The provisions of the bill set out certain obligations that the administration had to observe in the implementation of the JCPOA.​

Article 1 of the bill forbade either the production or application of nuclear arms by the Iranian administration based on a fatwa issued by Ayatollah Khamenei and obliged the executive branch to participate in international and regional efforts aimed at countering the threat of such weapons.

The remaining articles laid emphasis on, among other things, cooperation and mutual respect between the two sides of the agreement, the administration’s mindfulness of the other party’s potential failure in removing the sanctions or its reversing them, and the prevention of access by the International Atomic Energy Agency (IAEA) to military sites unless allowed by Iran’s Supreme National Security Council (SNSC).

The deal, however, has been put in danger since US President Donald Trump withdrew the US from the JCPOA in May 2018, and re-imposed the anti-Iran sanctions that had been lifted under the accord in a clear violation of JCPOA.

On May 8, 2019, Iran declared its decision to suspend the implementation of some of its commitments under the multinational agreement, exactly one year after the US unilaterally abandoned the international document.

In a statement, the SNSC said the decision was aimed at “safeguarding the Iranian nation’s security and interests” in the line with national rights under Articles 26 and 36 of the JCPOA.

The statement says Tehran has exercised utmost self-restraint and patience since Washington’s exit from the deal last May, and has given the remaining signatories “considerable” time at their own request to compensate for Washington’s withdrawal and guarantee Iran’s interests.