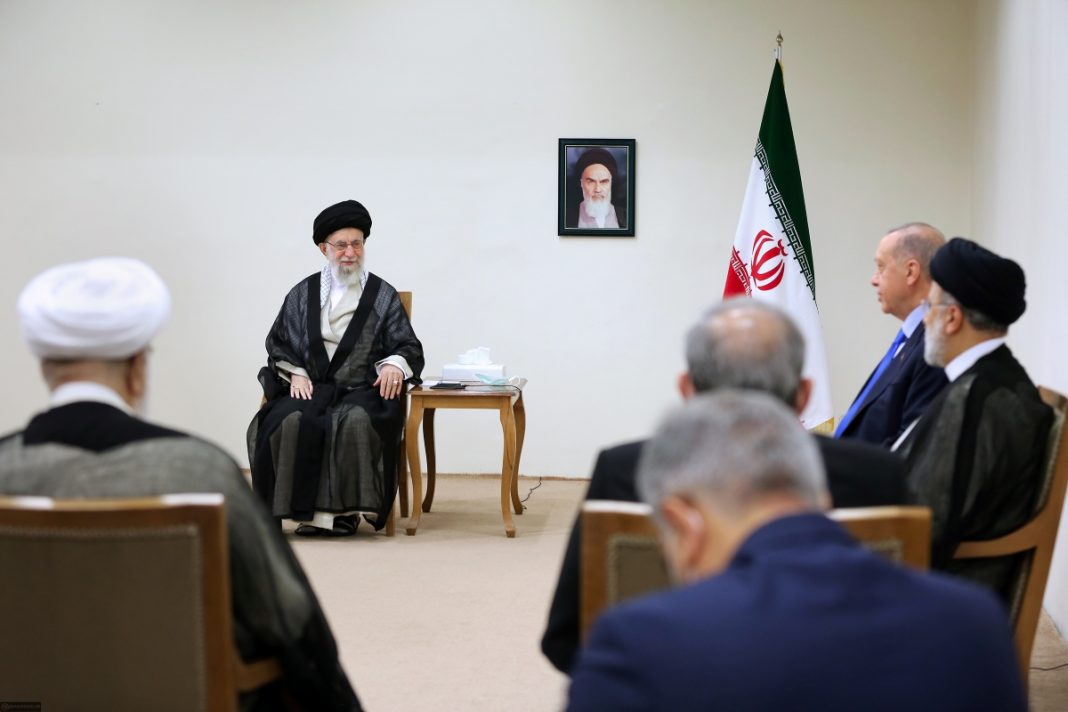 Leader of the Islamic Revolution Ayatollah Seyyed Ali Khamenei warns Turkey that any military action in the northern part of Syria harms not just Turkey itself but the broader region as well and will only serve the terrorists wreaking havoc in the region.

In a meeting with visiting Turkish President Recep Tayyip Erdogan on Tuesday, the Leader emphasized the necessity of respecting Syria’s territorial integrity, amid political efforts to restore peace to the crisis-torn Middle Eastern state.

The Leader made a reference to Turkey’s threats of a military offensive in northern Syria against US-backed Kurdish militants, which Ankara views as terrorists linked to the homegrown Kurdistan Workers’ Party militant group.

“It is highly important to protect Syria’s sovereignty and any military intervention in northern Syria will definitely harm Turkey [itself], Syria and the entire region” and will instead benefit the terrorists, he said.

Ayatollah Khamenei said Iran responds positively to Turkey’s request for a joint fight against terrorism, saying, “We will certainly cooperate with you in the battle against terrorism” in an address to Erdogan.

Iran, he added, Iran considers the security of Turkey’s borders as that of its own frontiers, calling on Turkey to adhere to a similar approach to neighboring Syria.
“The Syria issue should be resolved through negotiations. Iran, Turkey, Syria and Russia [should] put an end to this issue via dialog,” Ayatollah Khamenei said.

‘Israel behind enmity, rift in region’

The Leader described the Israeli regime as one of the factors behind enmity and rift in the region, which has the support of the United States.

Ayatollah Khamenei said Palestine is the Muslim world’s main issue, adding, “Despite some governments’ inclination toward the Zionist regime, nations are deeply opposed to the usurper regime.”

“Today, neither the Zionist regime nor America, nor any other party can block the great movement of the Palestinians and the Palestinian people will be the eventual beneficiaries,” he said.

Ayatollah Khamenei said the expansion of Iran-Turkey relations in different areas will be “fruitful” and “necessary,” adding, “We have always defended your government in domestic issues and against [instances of] intervention.”

“As you (Erdogan) already said, we have been friends in tough times and we [Iranians] pray for the Muslim Turkish nation,” the Leader added.

Elsewhere, the Leader expressed satisfaction with the return of Karabakh to the Republic of Azerbaijan but warned, “If there exists any policy that would block Iran-Armenia border, the Islamic Republic will surely stand against it since it is a route that dates back thousands of years.”

For his part, Erdogan stressed the need for stronger convergence between Iran and Turkey and in the entire Islamic world.

Turkey, he said, has never kept silent in the face of injustice against Iran and brotherly ties between the two nations should be enhanced in all areas.

The Turkish president said Ankara is and will continue to be against unilateral sanctions on Iran and supports Iran’s legitimate rights in the 2015 nuclear deal, which the US unilaterally abandoned three years after its conclusion.

He also highlighted years of Iranian and Turkish struggles against terror groups, adding that in Syria, terror groups receive huge arms support for Western states such as the US, Germany, the UK, and France.

“We expect the Syrian government to start political processes. In the Astana summits, the Syria issue is high on agenda and we hope we will achieve good results,” he said.