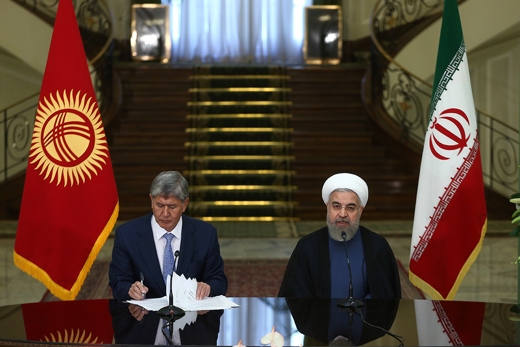 President Rouhani and his Kyrgyz counterpart have stressed the need for the two sides to have more cooperation.

Kyrgyz President Almazbek Atambayev arrived in Tehran on September 4 and held talks – during his stay – with senior state officials such as President Hassan Rouhani. Later the two presidents held a joint press conference which covered a wide range of issues, including mutual ties and regional cooperation.

Kayhan daily on September 6 published a report on the Kyrgyz president’s visit, the cooperation deals the two sides signed and the remarks the two presidents made in a joint press conference. The following is the translation of part of that report:

President Rouhani said in the press conference that Iran and Kyrgyzstan have close cooperation on regional and international issues,

Recalling the new Kyrgyz government’s adoption of approaches that favor independence, Rouhani said that the closure of Manas Air Base in Kyrgyzstan which used to be manned by American troops has brought Tehran and Bishkek closer together as far as regional and international questions are concerned. He added the two countries can raise the scope of their cooperation as a result of Bishkek’s new international approach.

“We have decided to draw up a ten-year plan for mutual ties. We should take into account the two sides’ potential for promotion of ties. Such a plan, when implemented, will benefit the two nations,” President Rouhani said.

For his part, the Kyrgyz president said that his country and Iran have no differences whatsoever, adding, “As the esteemed Iranian president mentioned, we had good talks and reached agreement on many issues. This shows a bright future lies ahead for the two countries.”

President Atambayev further said, “We also discussed the implementation of a big railroad project which connects China, Kyrgyzstan, Tajikistan, Afghanistan and Iran, and decided to study a plan to operate Iran-Kyrgyzstan flights.”

“Bishkek supports Iran’s full membership in the Shanghai Cooperation Organization (SCO) and I am sure this will help SCO raise its economic capabilities and improve the infrastructure [of its members],” he added.

The Kyrgyz president also said that Bishkek and Tehran agreed to put together a ten-year-old plan for their cooperation, adding the cooperation deals the two sides inked [during my trip] is proof of the two sides’ willingness to upgrade cooperation.