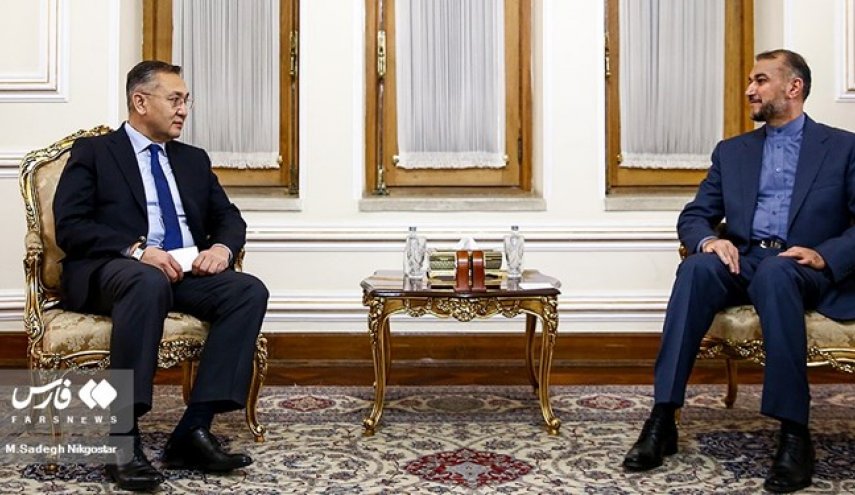 Taalatbek Masadykov, Kyrgyzstan’s Vice President at the country’s National Security Council has stressed the need for security cooperation with Iran.

Masadykov raised the issue at a meeting with Iranian Foreign Minister Hossein Amir Abdollahian in Tehran on Sunday.

Masadykov said Iran and Kygyzstan can work together to fight drug trafficking and to exchange experiences in border security.

The Kyrgyz official and Amir Abdollahian also discussed other issues of mutual interest.

Amir Abdollahian explained the policy of the new Iranian government toward neighbors, saying the recent exchange of delegations between Iran and Kyrgyzstan shows the determination of the two sides to promote cooperation and develop relations.

Amir Abdollahian underlined the need for a long-term horizon for cooperation between the two nations.

He stressed that Tehran and Bishkek should pave the way for expanding ties through establishing direct flights between the two capitals in order to facilitate visits by businesspeople, political delegations and tourists.

Amir Abdollahian also said that cooperation between Iran and Kyrgyzstan in transportation and transit and the pilot operation of the Kyrgyzstan-Bandar Abbas railway corridor to connect Kyrgyzstan to the West Asian region are important for the two countries.

Amir Abdollahian explained the vision of the Islamic Republic of Iran regarding Afghanistan. The Iranian foreign minister stressed the need to form a comprehensive government that would consist of all ethnic groups in Afghanistan with the aim of stabilizing the country and establishing peace there.