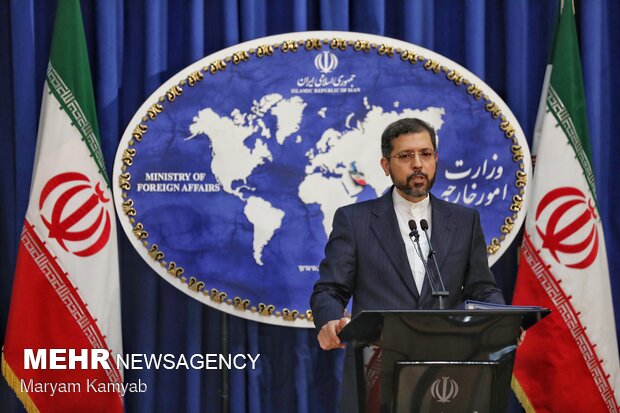 Iran says talks aimed at reviving the 2015 nuclear deal, known as the Joint Comprehensive Plan of action, will resume in the Austrian capital, Vienna.

Foreign Ministry Spokesman Saeed Khatibzadeh reiterated during his weekly briefing on Monday that there is a consensus in Iran’s establishment that talks aimed at ensuring the United States’ full compliance with the JCPOA and the UN Security Council resolution that endorsed the deal will resume.

“The United Sates must come to Vienna with a genuine agenda, and Iran will not wait forever as America uses its illegal sanctions as leverage to pressure the people,” The Foreign Ministry spokesman said.

Khatibzadeh said the American side must know that a Trump era mentality will result in nothing but maximum failure, adding that future talks must guarantee Iran’s national interests.

“These negotiations must provide a guarantee that benefits of sanctions removal as stipulated in the JCPOA will be completely ensured,” He added.

The Iranian Foreign Ministry spokesman noted that the Vienna talks can quickly produce results if the United States refrains from demanding more or less than what the 2015 nuclear deal requires.

Khatibzadeh also sharply criticized Europe’s inaction in the face of repeated U.S. violations over the past years.

Former U.S President Donald Trump withdrew America from the deal in May 2018 and re-imposed unilateral sanctions on Iran in a bid to force Tehran to renegotiate the nuclear deal, but the Islamic Republic refused to do so and in response rolled back some of it commitments under the JCPOA

Iran and the remaining parties to the 2015 nuclear deal namely Russia, China, Britain, France and Germany have held six rounds of talks in Vienna in recent months on a possible return of the United States to the agreement.

Also referring to the ongoing developments in Afghanistan, Khatibzadeh condemned “in the strongest terms” the Taliban attack on Afghanistan’s Panjshir Valley in north of Kabul on Sunday night.

He stressed there is only a political solution to the issue of Panjshir Valley which is the last Afghan province holding out against Taliban control.

In response to a question about reports of Pakistani involvement in the Taliban operation against Panjshir, Khatibzadeh said the foreign ministry is looking into these reports and that any foreign intervention in Afghanistan is condemned.