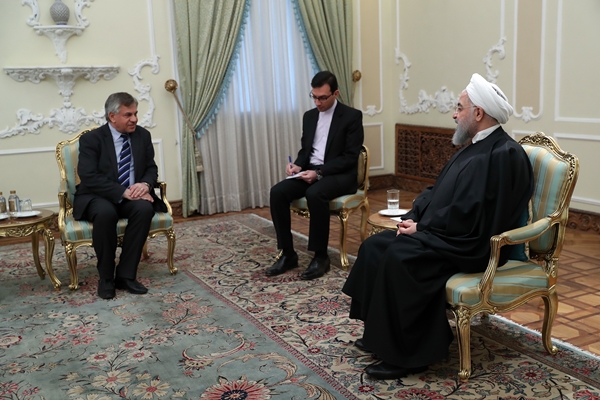 Iran’s president has hailed the amicable relations between Tehran and Baghdad, saying that the two countries’ ties can set an example to the whole region.

Hassan Rouhani made the remarks in a Saturday meeting with new Iraqi Ambassador to Tehran Saad Abdul Wahab Jawad Qandil, just two days before making his first-ever trip to Iraq as the Iranian president.

Rouhani said Tehran and Baghdad have great potential for the enhancement of mutual cooperation, adding the enthusiasm of both nations contributes to the further promotion of reciprocal ties.

President Rouhani said the Iranian government and nation are longing for the promotion of Iraq’s security, development and welfare as a brotherly and friendly country.

“Like a brother, the Islamic Republic of Iran has stood by the Iraqi nation and government in all areas and through all bitter and sweet events, and will continue to do so,” said Rouhani.

The president then touched upon his upcoming visit to Iraq, expressing hope invaluable and significant agreements will be reached during the trip in order to further deepen relations between the two sides.

The Iraqi diplomat, in turn, submitted his credentials to President Rouhani and stressed his country favours closer relations with Iran on all fronts.

He said Iran is regarded as one of the most countries for Iraq, adding Baghdad seeks to further reinforce Tehran-Baghdad relations.

He expressed hope that Rouhani’s trip to Iraq will be a major step toward the further promotion of reciprocal ties.

Rouhani is set to visit Iraq on March 11 in his first trip to the neighbouring state during his 5-year term in office. While in Iraq, he is scheduled to meet with senior Iraqi officials, including Prime Minister Adel Abdulmahdi, and top Shiite cleric Grand Ayatollah Ali al-Sistani.