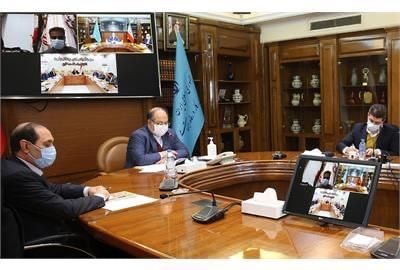 In a virtual meeting with his Iraqi counterpart Adel Al-Rikabi, the Iranian minister also expressed hope that with the setting up of a joint committee, the two countries will be able to settle issues of mutual interest.

He underlined creating jobs and entrepreneurship, labour, social welfare, rehabilitation and the exchange of workforce are among other fields where the two sides can work together closely.

The Iranian minister noted enemies have failed to drive a wedge between the two countries.

He underlined Iran always stood by Iraq when Iraqi people were fighting terrorists.

Shariatmadari expressed hope the further promotion of cooperation between the two sides will contribute to the establishment of peace and tranquility in the region.

The Iranian minister also praised the move to issue visas to nationals of both countries free of charge as of May 2019, saying it could boost activities in the tourism sector.

“Nearly 6 million Iranian and Iraqis can visit the two countries annually, which amounts to great potential for the enhancement of mutual economic and cultural relations.

The Iraqi official, in turn, stressed the importance of boosting mutual cooperation on different fronts.