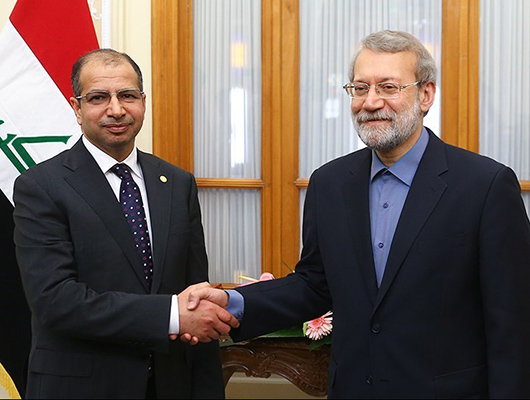 Addressing a joint press conference with his Iraqi counterpart Salim al-Jabouri in Tehran on Saturday, Larijani said they discussed a range of issues in their meeting this morning, particularly ways to counter the threat of terrorism in Iraq.

Apart from closer political coordination, Iran and Iraq are going to develop more serious security cooperation in order to cleanse the region of terrorists, Larijani added.

Iran is concerned about the fate of Muslims in the region, he went on to say, as reported by Tasnim.

The Iranian speaker also noted that he and Jabouri talked about the expansion of trade ties, saying both neighbours seek a jump in bilateral trade by removing the existing obstacles.

Jabouri, for his part, praised Iran’s support for the Arab country in the fight against foreign-backed ISIS terrorists, saying that Tehran has played a major role in helping the Iraqi nation.

Jabouri expressed concern over the spread of terrorism in the Middle East, saying, “We are facing a security crisis in the region, whose manifestation can be seen in ISIS and other terrorist groups.”

He further pointed to the presence of the terrorists in Iraq and said, “In such a situation, we needed neighbouring countries to side with us and it was the Islamic Republic of Iran that played an active role in this regard.”

Iran has had a major role in fighting against the ISIS terrorist group and assisting the Iraqi nation, Jabouri said.

Jabouri arrived in Tehran on Saturday morning for talks with senior Iranian officials on the latest situation in his country.

Iran and Iraq have enjoyed growing ties ever since the overthrow of the former Iraqi dictator, Saddam Hussein in 2003.

Iran, a close ally of Iraq, has been also supporting the Arab nation in the fight against ISIS since the terrorist group invaded Iraq in summer 2014.

Iraq has been facing the growing threat of terrorism, mainly posed by ISIS.

The Takfiri terrorist group made swift advances in much of northern and western Iraq over the summer of 2014, after capturing large swaths of northern Syria.

However, a combination of concentrated attacks by the Iraqi military and the volunteer forces, who rushed to take arms after top Iraqi cleric Ayatollah Ali al-Sistani issued a fatwa calling for fight against the militants, have blunted the edge of ISIS offensive.

Amid tensions in Iraq, Iran is known as the first country to help the Arab country and has always voiced support for Iraq’s unity, territorial integrity and prosperity.