In the Friday meeting, the two top diplomats expressed pleasure with the level of Iran-Indonesia relations and talks, the number of political and parliamentary delegations the two sides exchange, and the economic collaborations between the two states.

They also underlined the need for expansion and deepening of relations given the capacities existing in both countries.

The Iranian foreign minister further elaborated on the Islamic Republic’s principled approach towards the JCPOA under the current circumstances, and stressed that it is necessary for the other parties to live up to their commitments and that the Iranian nation reaps the JCPOA’s economic benefits.

Zarif arrived in Jakarta on Thursday as part of an Asian tour which earlier took him to Bangladesh. 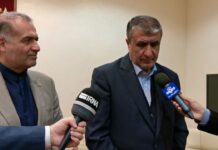