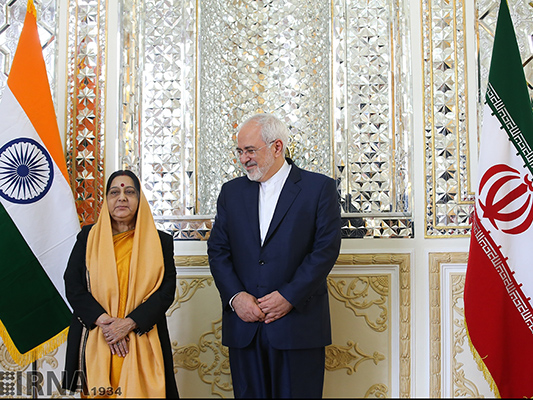 Iran's Foreign Minister Mohammad Javad Zarif and his Indian counterpart Sushma Swaraj have discussed issues of mutual interest in a meeting in Tehran.

During the Saturday talks, Zarif hailed the “good” and “growing” ties between Tehran and New Delhi.

He further pointed to the opening of Shahid Beheshti Port of Chabahar in southeastern Iran, and said it reinforces Iran-India mutual and regional cooperation.

“It also shows the importance of the port in the development of the region and the routes that connect Central Asian states to other countries in the world through the Sea of Oman and the Indian Ocean,” he added.

Swaraj, for her part, underlined the significance of ties with the Islamic Republic, and the need for expansion and deepening of bilateral relations.

The Chabahar Agreement, a trilateral deal between Iran, India, and Afghanistan, is a regional transport network initiative of the trio governments.

The agreement was signed by the three countries’ high ranking officials in Tehran in May 2016.

During the past month, two ships with major wheat cargos for Afghanistan have arrived in the port which is gradually emerging as a key transit point in a corridor that bypasses Pakistan.