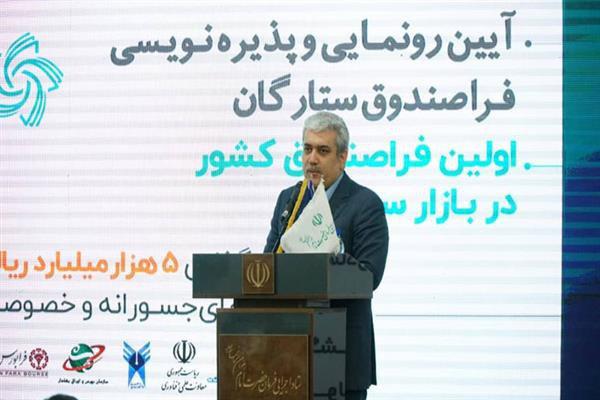 The development of the ecosystem of risky investment in Iran has taken a major step forward with the launch of the Star Fund as the country’s first ultra-fund in the capital market.

Addressing the ceremony to launch one of these funds, Iran’s Vice President of Science and Technology Sorena Sattari stressed that the ecosystem of risky investment had to be revived in previous years.

“It was the native ecosystem we destroyed with oil money and today we are working to restore it,” he said.

Sattari further noted that several risky investment funds have already been set up in the country, but the process is slow and needs to be boosted.

“A look at the lives of businessmen in Iran shows that we have had this culture in the country. They educated young people for entrepreneurship,” continued Sattari.

The Vice President for Science and Technology reiterated that in the past, a financial problem was considered an important issue in creating a business and it was thought that the problem can be resolved by allocating money, but this was a wrong culture.

“That included the Vice Presidency for Science and Technology as part of the government, but we have struggled with these over the years.”

Sattari, who is also the head of Iran’s National Elites Foundation, said in technological ecosystems the accelerators play the same role in increasing the pace of technology and innovation.

Sattari said the first phase saw huge government investment in education, which has yet to yield results as other components of the innovation and technology ecosystem are not merged with that.

“Of course, these human resource centres do not provide this ecosystem for the country because oil money is involved. We need more startups to fix it. The creation of innovation zones in cities has already begun. In the next two years we will have more than one million square metres of innovation space around cities.”

These areas are also tasked with providing human resources to accelerate the conversion of ideas into business, he underlined.