Pakistan should not allow terrorist operations to be launched against Iran from its soil.

The Iranian Interior Ministry on Saturday held Islamabad accountable for the terrorist attacks that claimed the lives of several policemen in southeastern Iran recently.

“We don’t expect the Pakistani government to allow terrorist operations to be launched against Iran from the Pakistani soil,” Interior Ministry Spokesman Hossein Ali Amiri told reporters in Tehran on Saturday.

He called on the Iranian Foreign Ministry to take more active measures in contacts with Islamabad to push the neighboring country not to allow its territory become a launching-pad for terrorist operations against Iran.

Yet, the spokesman said the terrorist attacks did not have any military value as they were only some hit-and-run operations by the terrorists who snuck into Iran from a neighboring state, carried out terrorist operations and then escaped to the same country.

Amiri called for Pakistan’s serious cooperation in preventing terrorists’ infiltration into Iran, and said, “The Pakistani government should be held accountable for the terrorist operations.”

Four Iranian police officers, including a conscript, were killed in two terrorist attacks on a border post in the southeastern province of Sistan and Baluchestan.

The tragic event took place on Wednesday and Thursday in the vicinity of the city of Saravan near the border with Pakistan. 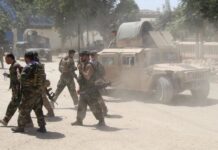