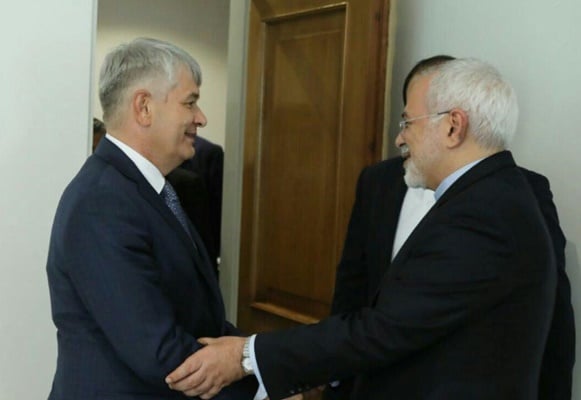 Iranian Foreign Minister Mohammad Javad Zarif says Tehran is delighted that Tashkent has decided to open a new chapter in its relations with regional states, Iran in particular.

Zarif made the comments in a meeting with Secretary of the National Security Council of Uzbekistan Viktor Makhmudov and the high-ranking politico-economic delegation accompanying him in Tehran.

During the Tuesday talks, Zarif expressed pleasure with the visit of the high-ranking Uzbek delegation to Iran, and said he is optimistic about the future of bilateral relations between the two sides.

“We are happy to see the beginning of a new and constructive era of relations between Uzbekistan and the region as well as the Islamic Republic of Iran.”

“We believe the development of cooperation between Tehran and Tashkent is in the interests of both nations and in line with reinforcing regional cooperation, maintaining peace, stability and security in the region,” he added.

The Iranian top diplomat said that contributing to the process of strengthening security, stability and economic cooperation in the field of transit in Afghanistan is among the common goals pursued by both Iran and Uzbekistan.

“The Islamic Republic of Iran wants a powerful region based on cooperation,” he added.

The Uzbek official, for his part, hailed the historical and cultural commonalities between the two countries and their common stances on regional and international issues.

“The leadership of Uzbekistan believes in [the need for] expansion of ties with Iran in all fields,” he noted, adding that Tashkent wants to boost its business ties with Tehran in a range of areas including transit, transportation, energy, culture and tourism based on the two countries’ common resolve.

He also described his meetings with Iranian officials as very constructive.