Iran FM’s Talks in Brussels to Focus on JCPOA, Not Riots 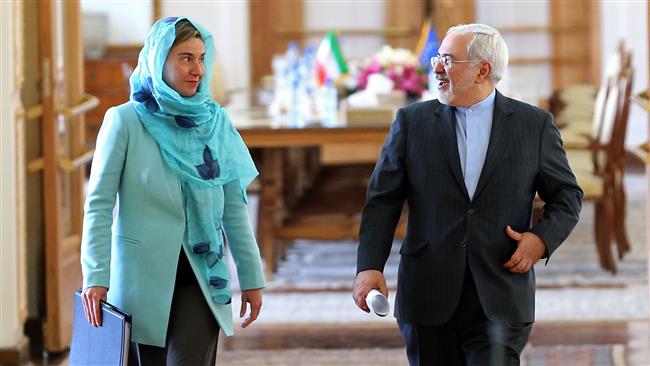 Tehran has rejected media reports linking an upcoming meeting between Iranian and EU officials to recent scattered riots in Iran, saying the planned talks will focus on the 2015 multilateral nuclear deal.

Speaking at a news conference on Monday, Iran’s Foreign Ministry spokesman Bahram Qassemi said Foreign Minister Mohammad Javad Zarif is due in Brussels later this week for talks with the EU’s foreign policy chief, Federica Mogherini, as well as his British, German and French counterparts.

“This meeting will be held at the invitation of Ms. Mogherini, and is only meant to review the process of implementing the JCPOA,” said Qassemi, using an acronym for the nuclear deal officially called the Joint Comprehensive Plan of Action.

He was reacting to a foreign media fanfare created over Mogherini’s invitation, which claim that the EU had convened the meeting to address the riots in Iran.

“This meeting has been associated with Iran’s domestic affairs with vicious intentions,” Qassemi said. The session would possibly take place at Mogherini’s office on Thursday or Friday or earlier, he added.

Earlier in the day, Zarif, himself, commented on the claims in media reports, saying, “Some media outlets, especially Israeli ones, tried to fabricate news in this regard. Such news fabrication is baseless and unfounded.”

Snub at UNSC for US

On Friday, the UN Security Council (UNSC) gave into a US push for a meeting on the events inside Iran. The session, though, did not go as planned as the Council’s veto wielders and Washington’s own allies used the debate to criticize the White House for involving the body in Iran’s domestic affairs.

At the meeting, several UNSC members defended the JCPOA and warned the US against attempts to exploit the recent developments inside Iran to undermine the 2015 nuclear accord.

Qassemi touched on the US’s failure to bring UNSC members onboard against Iran at Friday’s session, describing it as yet another defeat for Washington in its regional and foreign policy.

The developments at the council showed a “new era” has dawned, and that the Security Council, along with the entire international community, does not follow in Washington’s footsteps.

Qassemi further said Washington’s potential departure from the Iran deal or any irrational attitude on its part would be met with Tehran’s proportionate and strong reaction, “which will bring regret to the US administration.”