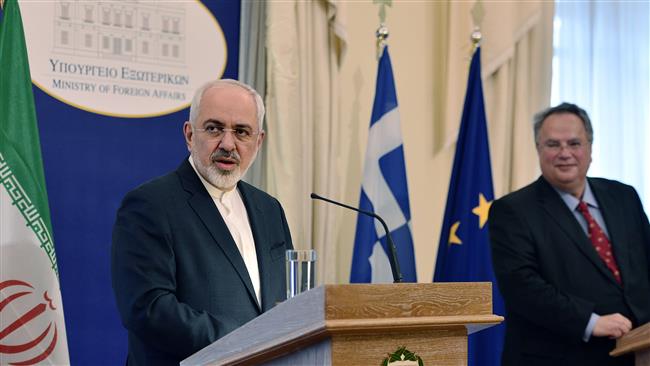 “I would expect my negotiating partners to refrain from making excessive demands,” Zarif said after meeting with his Greek counterpart, Nikos Kotzias, in the Greek capital city of Athens on Thursday.

His remarks came a day after French Foreign Minister Laurent Fabius said Paris would not approve a final nuclear deal which rules out the inspection of Iran’s military sites.

Fabius said Paris “will not accept a deal if it is not clear that inspections can be done at all Iranian installations, including military sites,” adding that this is the “independent” position of his country.

Zarif, however, stressed that France’s new stance runs counter to the mutual understanding reached between the two sides in the Swiss city of Lausanne on April 2, saying what Paris demands is tantamount to a request to re-negotiate the Lausanne agreement.

“If people insist…on re-negotiations, then it will be difficult to envisage an agreement,” he went on to say.

Such an accord is accessible before the deadline of June 30 provided that “people have their foot in reality, not in illusions,” he said, adding, “We can only have agreements in which both sides can claim that they have achieved positive results. You need to either win together, or lose together.”

Zarif added that Tehran seeks to clinch a “dignified, mutually respectful agreement” with its negotiating partners.

The comments comes as Zarif and his US opposite number, John Kerry, are set to meet in the Swiss city of Geneva on Saturday in an effort to facilitate the progress in talks over Iran’s nuclear program.

The latest round of negotiations between Tehran and the P5+1 group – Russia, China, France, Britain, the US plus Germany – came to an end in the Austrian capital city of Vienna on May 22.