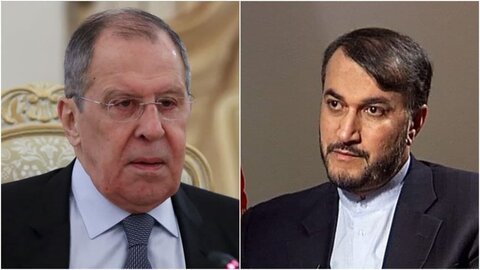 In a phone conversation with his Russian counterpart, Hossein Amir Abdollahian underlined the need for the IAEA’s director general to avoid adopting political stances.

He referred to an agreement between Iran and the nuclear deal’s coordinator regarding the time of the 4+1 group’s talks with Tehran. He stressed that fast progress in talks is contingent upon the European troika and the U-S adopting a realistic and constructive approach through avoiding demanding too much of Iran and making demands beyond the nuclear deal, also known as the JCPOA.

Amir Abdollahian said Iran takes into account the process and records of previous talks in Vienna, adding Tehran will insist on its demands forcefully.

The Iranian foreign minister reiterated that no one should even doubt Iran’s seriousness about the talks and the need for all sides to return to their obligations under the nuclear deal.

He also spoke of the latest US sanctions on Iran. Amir Abdollahian said although Iran is pessimistic about the US intentions, it will return to full compliance with the nuclear deal if Washington does the same and does not place increased demands on Iran.

The Russian foreign minister also stressed the importance of reviving the JCPOA. He said all sides, and first and foremost the US, must return to full compliance with the deal.

Sergei Lavrov noted that Moscow has always emphasized the need for the US to stop destructive measures against the JCPOA.

The foreign ministers of Iran and Russia also agreed that it is necessary to send humanitarian aid to Afghanistan given that the cold season is approaching. The two sides also underscored the importance of the formation of an inclusive government in Afghanistan.

The Iranian foreign minister also spoke of the latest developments in the Caucasus region. He said the Islamic Republic of Iran supports regional talks in the format of 3+3 or other formats upon which all sides agree in order to resolve the disputes in the region and to expand regional cooperation.