Iranian Foreign Minister Mohammad Javad Zarif has dismissed a call by a US State Department official for signing a new treaty with Iran, saying the Donald Trump administration, a violator of international treaties, is just mocking calls for peace.

“US calls JCPOA ‘a personal agreement between two governments’, claiming it ‘seeks a treaty’. Wrong. It’s an int’l accord enshrined in a UN SC res,” Zarif said in a Thursday tweet.

Zarif made the comments in reaction to US special envoy for Iran Brian Hook, who said his country seeks a treaty with Iran ahead of the next week’s United Nations General Assembly meeting in New York.

“The new deal that we hope to be able to sign with Iran, and it will not be a personal agreement between two governments like the last one, we seek a treaty,” he told an event at the Hudson Institute on Wednesday.

Zarif also noted that the “US has violated its treaty obligations too & faces 2 suits at ICJ. Apparently, US only mocks calls for peace. #HaveYouNoShame“ 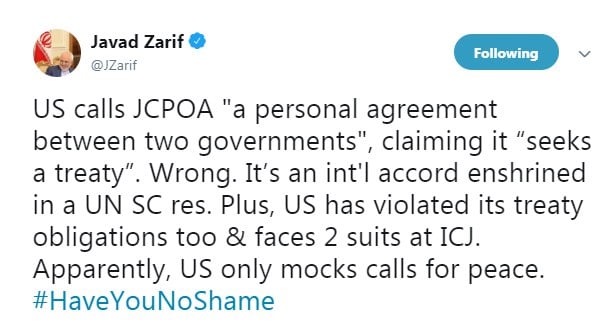 He was referring to Tehran’s lawsuit against the US at the International Court of Justice over its sanctions against the Islamic Republic. The ICJ began hearing Iran’s arguments last month.

The country’s representative at the hearing said the US sanctions are designed to exact the heaviest possible damage to the Iranian people. Iran lodged the lawsuit last month on the grounds that the US sanctions violate the terms of a 1955 treaty between Tehran and Washington and that the measures must be lifted.