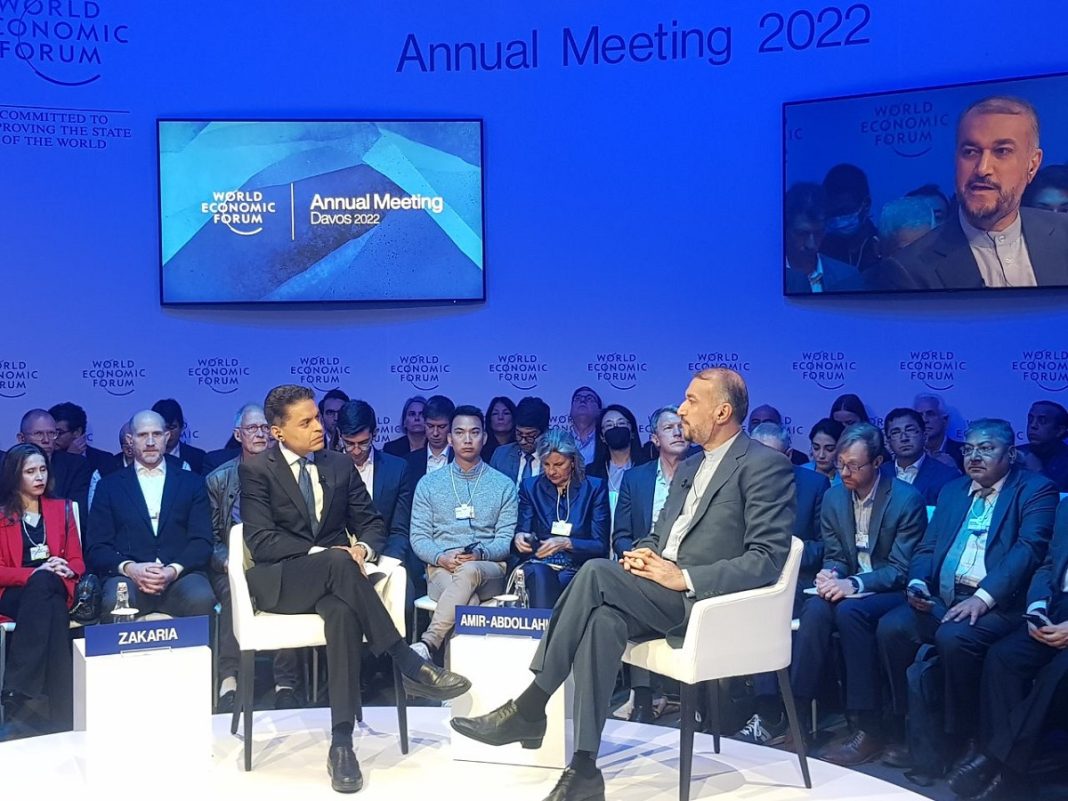 Iranian Foreign Minister Hossein Amir Abdollahian says Tehran has tabled a new initiative for an agreement in the Vienna talks for the revival of the 2015 nuclear deal, but the US government seems to be sitting on the fence on the issue.

Amir Abdollahian, who was speaking on the sidelines of the World Economic Forum in Switzerland’s Davos, said the proposals were tabled recently and followed other ones Iran had earlier presented to the negotiating parties in the talks.

The top Iranian diplomat expressed hope that the American side respond to Iran’s initiative with pragmatism.

“With the return of all sides to the Joint Comprehensive Plan of Action, we should [be able to] reap the economic benefits of the deal. All elements of [former US President Donald] Trump’s maximum pressure must be removed. A return to the JCPOA is not possible with Iran being deprived of its economic benefits and elements of Trump’s maximum pressure campaign in place,” he said.

Amir Abdollahian added that US President Joe Biden should make his decision, noting that Iran is committed to reaching a good and lasting agreement.
He stressed that Iran has “kept the window of diplomacy open” and an agreement will be hopefully at hand if the US adopts a pragmatic approach.

Amir Abdollahian, however, noted that the US is yet to show a reassuring stance on the economic guarantees Iran has required.

Iran has other options on table

Amir Abdollahian added that Americans know what they should do to return to the JCPOA.

“The most important issue is that economic sanctions against Iran should be effectively removed. Downplaying this key issue and focusing on another issue is not the correct behavior and response,” he said.

“If the Zionist lobby keeps away from the US interests, Biden can easily take action to reach a good and lasting agreement. If this does not happen, We, Iran, who tolerated 40 years of pressure, will definitely have different options on the table.”

War no solution to Ukraine crisis, US and NATO provoked Russia

The foreign minister also talked about the Ukraine crisis blaming “provocative actions of the US and NATO” for the war in the country.

“We strongly condemned the military attack against Ukraine. We consider the war against Ukraine wrong, just as is the case in Afghanistan, Iraq, Yemen and Palestine,” he said.

He said, however, that the US and NATO provoked Russia with their attempts to expand military presence in the region.

“Is war the way forward to counter the provocation by the US and NATO? We support talks and political dialog. Last week I told [Russian Foreign Minister Sergei] Lavrov that we are ready to host both sides in Iran,” he said.

Progress made during Iran-Saudi Talks

That, the top diplomat said, was among “the little but good” progress made during the latest round of talks with Saudi Arabia.

“We have kept the door open for Riyadh to use it to normalize ties when it is willing to do,” he said.

Yemen truce should be extended

Amir Abdollahian also said the future of Yemen should not be limited to a certain group or factions.

“Ansarullah and its allies in Yemen managed to resist the war. The truce should continue and the blockade on Yemen should be ended and all Yemeni sides should sit at the negotiating table and decide for their country,” he said.