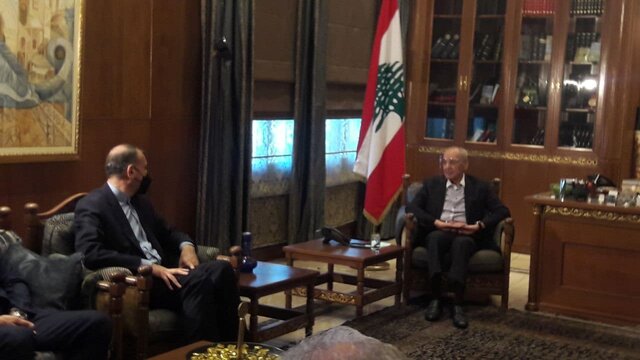 Iran's Foreign Minister Hossein Amirabdollahian has met with Lebanese President Michel Aoun as first part of his discussions in Lebanon.

During their meeting on Thursday, the two sides stressed the need to increase the level of interaction and cooperation in the economic, political and cultural fields.

The issue of standing up to the threats of the Zionist regime and the Islamic Republic of Iran’s support for the territorial integrity and independence of Lebanon were discussed during the talks.

Later in the day, Amirabdollahian sat down for discussions with Lebanese Parliament Speaker Nabih Berri.

The top Iranian diplomat stressed the need to expand cooperation between the two countries in different fields.

During the meeting with Berri, Amirabdollahian also thanked and appreciated the Lebanese resistance against the Zionist regime adding that Iran, with all its strength, will stand by Lebanon in all crises.

He told reporters after the meeting that Iran is ready to provide all possible assistance to Lebanon to overcome the current situation.

The Iranian foreign minister says during his meetings in Lebanon he will put forward better and newer suggestions for breaking the economic blockade of Lebanon, adding that Iran will keep up its current form of support for Lebanon as long as Beirut wants.

Iran has been transferring much-needed fuel to Lebanon through Syria in recent weeks.