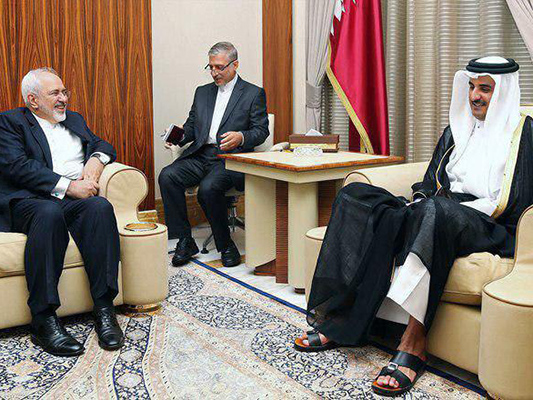 During the Tuesday meeting, Zarif and Sheikh Tamim conferred on bilateral relations between Tehran and Doha as well as regional issues.

Zarif highlighted the Islamic Republic of Iran’s principled policy of establishing best relations with all of its neighbours, and expressed the hope that Iran-Qatar ties would further expand in all fields.

He also called on the Iranian and Qatari official bodies to provide facilities for expansion of interactions between the two countries’ people and private sectors in order to tap into the existing business and economic opportunities.

The Iranian top diplomat also pointed to the sensitive conditions of the Middle East and the detrimental consequences of violent encounters and conflicts, and stressed that there is no military solution to any of regional crises.

“All parties should remain committed to dialogue and peaceful solutions,” Zarif noted.

Iran wants to have best relations with all of its neighbours and believes that all sides should prioritize regional initiatives aimed at establishing collective stability and security.

The emir of Qatar, for his part, expressed pleasure with the developing relations between Tehran and Doha, and stressed that his government and nation have always sought best relations with their northern neighbours.

He further welcomed Tehran’s stance on regional issues and the need for finding peaceful solutions to ongoing crises, and said, “Continued consultation with regional countries, including Iran, is an undeniable necessity.”

Sheikh Tamim also noted that he is happy to see Tehran-Doha relations are growing, and underlined the need for increased ties between Iran and other Persian Gulf littoral states.

Zarif arrived in Doha on Monday in his first trip to the Persian Gulf littoral state since Saudi Arabia, Bahrain, the United Arab Emirates, and Egypt cut ties with Qatar in June.

The four countries accuse Qatar of backing “extremism” and fostering ties with their rival Iran, charges that Doha denies.

Before heading to Qatar, the Iranian top diplomat visited Muscat, the capital of Oman, where he conferred with Sultan Qaboos and his Omani counterpart on various issues of mutual interest, particularly regional issues and bilateral ties.

According to Oman’s official news agency, Zarif also held talks with Omani authorities on energy, economy and transit as well as the potential transfer of Iran’s gas through the Sultanate of Oman to India.

Oman and Iran in 2014 agreed to build an underwater pipeline to pump Iranian gas to the Omani port city of Sohar.