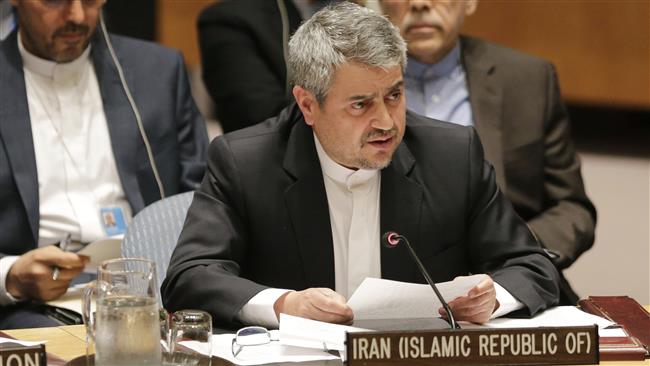 Khoshrou said the consensus on the draft and support for it by various countries indicates that the UN must take immediate action for containing violence and extremism in the world.

Iran’s Ambassador to the UN Gholamali Khoshrou has submitted to the world body an updated version of a resolution based on President Hassan Rouhani’s proposal for the World Against Violence and Extremism (WAVE).

The draft was presented to the General Assembly in New York during on Thursday.

In December 2013, the General Assembly overwhelmingly voted to approve President Rouhani’s WAVE proposal, which called on all nations across the globe to denounce violence and extremism.

The Iranian president had made the proposal in his address to the UN Disarmament Conference in New York on September 25, 2013.

Khoshrou said the consensus on the draft and support for it by various countries indicates that the UN must take immediate action for containing violence and extremism in the world.

The Iranian envoy further warned against associating violent extremism with any religion. He said those who are accusing divine religions of violence are engaged in hate speech and fanning the flames of prejudice.

Referring to the atrocities committed at the hands of Takfiri militants in Iraq and Syria over the past two years and recent acts of terror in France, Lebanon and Egypt, among other places, claimed by Daesh terrorists, Khoshrou said the acts of terror signify the role the UN General Assembly can play in stemming the tide of extremism.

“In the world today, terror threats know no geographical boundaries,” he said, noting that launching collective efforts by the international community is the only way to face the issue of terrorism.

The Takfiri Daesh terrorists, who were initially trained by the CIA in Jordan in 2012 to destabilize the Syrian government, now control parts of Syria and Iraq. They have been engaged in crimes against humanity in areas under their control.