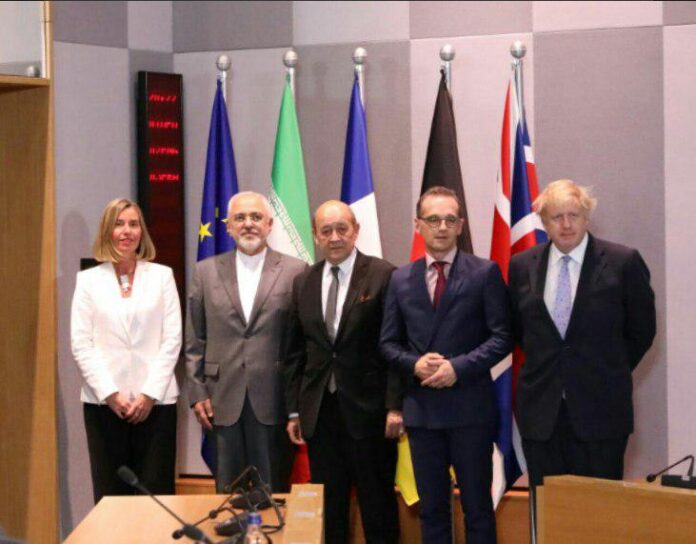 The foreign ministers of Iran and the E3 (France, Germany, and the UK) as well as the EU foreign policy chief have issued a statement on the result of their talks in Brussels regarding the Iran nuclear deal.

Following the US announcement of its withdrawal from the Joint Comprehensive Plan of Action (JCPOA), the Iran nuclear deal, EU Foreign Policy Chief Federica Mogherini held talks with the Foreign Ministers of France (Jean-Yves Le Drian), Germany (Heiko Maas), the United Kingdom (Boris Johnson) and of the Islamic Republic of Iran (Mohammad Javad Zarif) on Tuesday, May 15, 2018.

According to the press release, the top diplomats attending the meeting:

Recalled their commitment to the continued, full and effective implementation of the Iran nuclear deal that was unanimously endorsed by the UN Security Council Resolution 2231, as a key element of the global nuclear non-proliferation architecture and a significant diplomatic achievement;

Regretted the withdrawal of the United States from the Iran nuclear deal and recognised that the lifting of nuclear-related sanctions and the normalisation of trade and economic relations with Iran constitute essential parts of the agreement;

Stressed the commitment they all share to ensure that this will continue to be delivered and they agreed to this end to deepen their dialogue at all levels.

They also undertook, in particular, to launch intensive expert discussions with Iran, addressing the following issues with a view to arriving at practical solutions in the next few weeks:

The continued sale of Iran’s oil and gas condensate petroleum products and petrochemicals and related transfers;

The further provision of export credit and development of special purpose vehicles in financial banking, insurance and trade areas, with the aim of facilitating economic and financial cooperation, including by offering practical support for trade and investment;

The further development and implementation of Memoranda of Understanding and contracts between European companies and Iranian counterparts;

And last but not least, the further development of a transparent, rules-based business environment.

They finally reaffirmed their resolve to continue to implement the nuclear deal in all its parts, in good faith, and in a constructive atmosphere, and agreed to continue to consult intensively at all levels and also with other parties to the JCPOA.