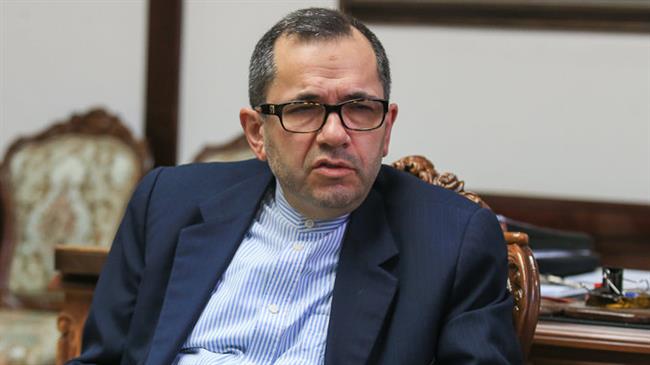 Iran’s ambassador to the United Nations blasts the United States’ back-to-back attempts at spreading “disinformation” about the Islamic Republic.

“US disinformation campaign vs Iran continues,” the envoy tweeted on Friday.

In somewhat twin attacks targeting Iran in a single day, the US military claimed that one of its warships had seized Yemen-bound weapons believed to be of Iranian “design and manufacture,” while the American mission to the UN skewed one of the world body’s reports to flesh out a claim by Washington and its allies that Iran had struck Saudi Arabian oil facilities last September.

“Apart from absurd claims that Iranian weapons bound for Yemen were seized, US misuses a UN report to say Iran is responsible for an attack on Saudi oil facilities,” Takht-e Ravanchi added.

The US military claimed that its guided-missile cruiser Normandy had commandeered a vessel laden with the weapons, which it purported were 150 anti-tank guided missiles and three surface-to-air missiles.

Despite routinely hailing Yemeni forces for their decisive defense of the impoverished country against an ongoing US-backed Saudi-led war, Tehran has invariably rejected any allegations by Washington and its allies of ever arming those forces.

The American diplomatic mission, meanwhile, seized on a January 27 report by the UN Panel of Experts on Yemen that had ruled out the likelihood that Yemen’s Houthi Ansarullah popular defense movement had launched the reported attacks against a plant belonging to Saudi Arabia’s Aramco oil giant in the kingdom’s far east.

The mission said the panel’s findings, therefore, “reinforces the conclusion of the United States, France, Germany, and the United Kingdom that Iran bears responsibility.”

The Iranian ambassador said, “In reality, the report makes no reference to Iranian responsibility.”

The Houthis themselves claimed responsibility for the reported incidents on January 29, saying they had staged rocket and drone strikes at Saudi targets, including Aramco oil facilities. The same UN panel had itself reported last December that “it is unable to independently corroborate” that the weapons allegedly “used in these attacks are of Iranian origin.”

The allegations targeting the Islamic Republic come while the US, the UK, and France, among some other Washington-aligned states, have been providing generous military, logistical, and political support for the Saudi-led war against the Arab world’s most impoverished nation.

The military support has included arming the Saudi military with precision ammunition, and deploying commandos on the Saudi-Yemeni border to try and neutralize the Houthis’ defensive maneuvers.

As part of the logistical support, the US would provide aerial refueling for the warplanes engaged in Saudi-led offensives. The American military stopped the latter involvement, but only after the Saudi-led coalition grew independent of it.

Tens of thousands have died and entire Yemen been pushed close to the brink of outright famine since the beginning of the 2015-present war, which seeks to restore Yemen’s former Saudi-allied officials.