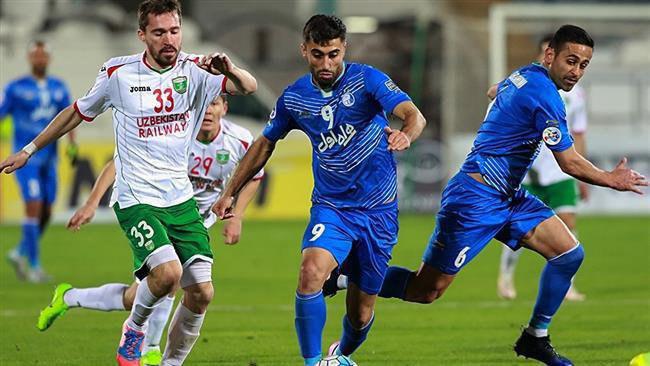 Esteghlal moved to the top of Group A of the 2017 AFC Champions League with a win against Uzbekistani football club PFC Lokomotiv Tashkent.

On Monday evening, the Tehran-based team pummelled Railroaders 2-0 in a match played at all-seater Azadi Stadium in western Tehran.

Esteghlal finally took the lead in the 37th minute, with Esmaeili receiving the ball and firing it through a crowd of players from 16 yards towards the visitors’ goalpost. The ball cruised past Ignatiy Nesterov and kissed the net.

Ali Ghorbani also got himself on the score sheet in the 84th minute to seal Esteghlal’s 2-0 win over Lokomotiv, Press TV reported.

Both teams were not able to produce a goal in the first half, but after the restart a mistake from Javlon Mirabdullaev allowed Honduran striker Jerry Bengtson to get the first goal for Zob Ahan.

Things went from bad to worse for the home side in the dying minutes of the match as Morteza Tabrizi netted a penalty in the injury time and secured a 2-0 win for his green-clad Iranian squad.

The other Iranian teams in the ACL, Persepolis FC and Esteghlal Khuzestan, will also play their matches on Tuesday afternoon.