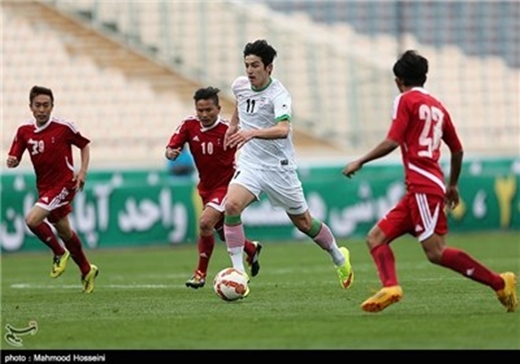 Iran’s victory places it atop the Group C table on six points, two clear of Saudi Arabia and Afghanistan.

Iran defeated Palestine 3-0 in Group C of the 2016 AFC U-23 Championship qualifiers on Friday.

In the match held at Azadi Stadium, Sardar Azmoun gave the host a lead in the 49th minute.

Iran doubled its lead through Arsalan Motahhari in the 80th minute. Motahhari made it 3-0 in the injury time.

Iran’s victory placed it atop the Group C table on six points, two clear of Saudi Arabia and Afghanistan, who played a goalless draw in a fixture earlier at the PAS Stadium.

Iran, who has defeated Nepal 5-0 in its opening match, will play Afghanistan on Sunday.

Ten group winners and five best second-placed teams from all groups will join host Qatar at the AFC U-23 Championship 2016, with January’s 16-team competition also serving as Asia’s qualifying tournament for the Olympic Games in Rio.