Iran and Cuba Proved US Sanctions Can Be Overcome: Zarif 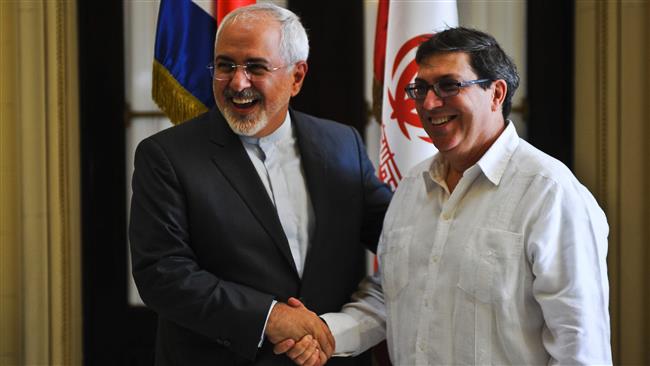 Iranian Foreign Minister Mohammad Javad Zarif says Iran and Cuba have both endured cruel sanctions imposed by the United States, stressing that such bans have enhanced the perseverance and resistance of the two nations.

“The resistance of the Iranian and Cuban nations has left the hegemonic countries no other choice but compromise and renunciation of their hostile policies even in their words,” Zarif said in the opening ceremony of Iran-Cuba joint economic conference in Havana on Monday, as reported by Press TV.

He added that steadfastness of the Iranian and Cuban people is a “valuable asset” to improve cooperation between the two countries’ state and private sectors.

The top Iranian diplomat further emphasized that Tehran and Havana should make use of the appropriate opportunity created following the removal of sanctions against Iran to strengthen relations.

“Iran and Cuba enjoy broad interaction on political and international scenes and their cooperation must be improved in the economic sector,” Zarif said.

He noted that the high-ranking politico-economic delegation accompanying him in his six-nation tour of Latin America indicates that the “Islamic Republic attaches great importance to its deep and strong ties with Cuba and the Latin American countries.”

He said Tehran and Havana can boost cooperation, adding that this would be beneficial to Latin American countries.

US Policy of Sanctions against Iran, Cuba Fallen Flat: Zarif 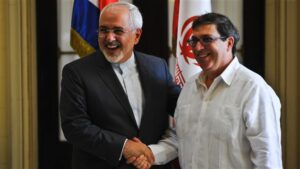 In similar remarks made in a meeting with his Cuban counterpart Bruno Rodriguez, Zarif noted Iran and Cuba have proven that the United States has failed to advance its agendas by exerting pressure on the two countries.

Zarif added that Iran and Cuba proved that they can overcome sanctions through resistance.

“The Iranian nation proved that sanctions imposed by big powers cannot distance it from its policies and viewpoints,” he said.

He added that Iran has always stood by the Cuban nation in countering sanctions and hailed Havana’s support for the Iranian people in the face of brutal US-led bans. 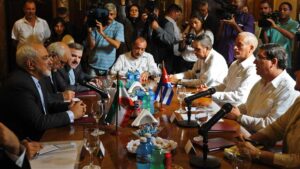 The top Iranian diplomat said Tehran and Havana can boost cooperation on the international scene, adding, “The two countries have always had common stances on confronting the use of economic force and pressure as well as meddling in the internal affairs of other countries.”

He expressed hope that Iran and Cuba, as two influential members of the Non-Aligned Movement (NAM), would through their cooperation “succeed in further advancing the objectives” of the body. 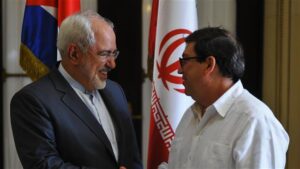 The Cuban foreign minister, for his part, said his country takes pride in Iran’s achievements and successes and added that Havana is resolved to promote its relations with Tehran.

Rodriguez hailed the very good political ties between the two countries at bilateral and international levels.

He reaffirmed Cuba’s supportive stance on Iran’s right to use nuclear energy and said Havana would counter all types of cruel sanctions, particularly in the financial sector.

Zarif also met with Cuba’s President Raul Castro on Monday in the Cuban capital of Havana, where the top Iranian diplomat arrived on Sunday night at the head of a high-ranking politico-economic delegation.

The two statesmen discussed the development of bilateral ties, international and Middle East affairs, as well as the upcoming summit of the Non-Aligned Movement (NAM), which is to be held in Venezuela later in the year.

Iran and Cuba have both been the target of various US sanctions over the past decades.

However, sanctions against Iran over its nuclear program were stipulated to be removed under last year’s agreement between Tehran and the Group 5+1, known as the Joint Comprehensive Plan of Action (JCPOA), which went into effect on January 16.

Meanwhile, despite a thaw in diplomatic relations between Washington and Havana, a 55-year embargo on Cuba still remains in place. The two countries became ideological foes soon after the 1959 revolution that brought Fidel Castro to power and their ties remained hostile even after the end of the Cold War. 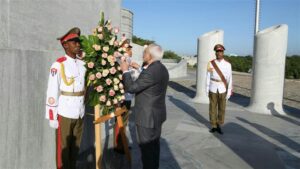 Earlier on Monday, the Iranian foreign minister paid tribute to Jose Marti, Cuba’s national hero, and laid a wreath at his memorial monument.

Zarif and his entourage visited parts of the building.

Heading a 120-strong politico-economic delegation, Zarif arrived in the Cuban capital Sunday night as the first leg of his official Latin America tour, which will also take him to Nicaragua, Ecuador, Chile, Bolivia and Venezuela.