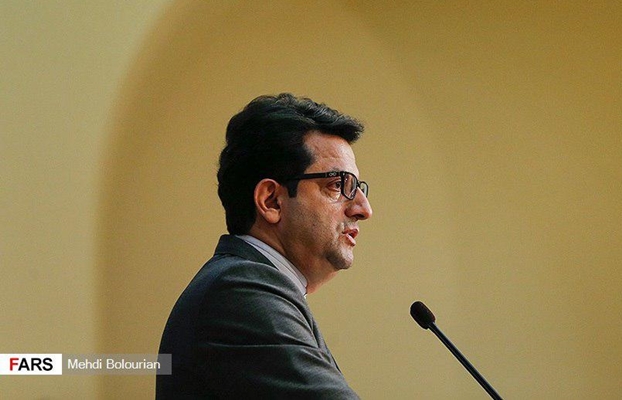 In a statement on Friday, Mousavi said Pompeo has come to the State Department from the leadership of an infernal, deceitful, pro-regime change, and torturer organization (CIA).

“Having brought his infernal thoughts to the civilized field of diplomacy (State Department), Pompeo is not on a par with any foreign minister in the world, and has no position in this field,” the Iranian spokesman said.

“Foreign ministers are usually harbingers of peace, reconciliation, dialogue, and respect, but Mr Pompeo is a mouthpiece of bullying, deceit, humiliation, and insult with a language of anger, aggressiveness, ignorance, and extremism,” he added.

Mousavi condemned Pompeo’s remarks, and stressed that Americans will get nowhere with such methods.

“So far the image they have presented to the people and elites of the US and the world has been nothing but that of an inefficient, delusive, chaotic, static, and bullying diplomacy and foreign policy,” he added.

“One day, the locks on the doors of the Iranian Embassy here in Washington could be cut off. One day, Iran Air could fly direct to Los Angeles, to Houston. … One day, our leaders could receive one another in good will and not as adversaries. What a moment that would be,” Pompeo further claimed.

The comments came as US Treasury Department imposed sanctions against two Iranian judges for what it called violation of the rights of Iranian citizens as well as their role in sentencing American citizens.

He criticized the Obama administration for failing to offer support to protesters in 2009. “When the opportunity arose, America did not do that.”

Following the November unrest in Iran, the country’s Foreign Ministry summoned the Swiss ambassador, whose country represents the US interests in Iran, to protest Washington’s interference in the Islamic Republic’s internal affairs.

At the time, Iran protested the US’ expression of support for a series of violent riots and protests over the rise in oil price that hit a number of Iranian cities.

Earlier, Foreign Minister Mohammad Javad Zarif slammed the US’ intervention in Iran’s internal affairs, saying that the US government with such coercive economic actions can’t claim that it’s supporting the Iranian nation.

“The regime, that imposes coercive economic actions and bars delivery of food and drugs to the elderly and patients, can never claim that it’s supporting the Iranian nation. Mr. Pompeo should first answer for the announced terrorist actions and crimes against humanity and against the Iranian nation,” he said at the time.