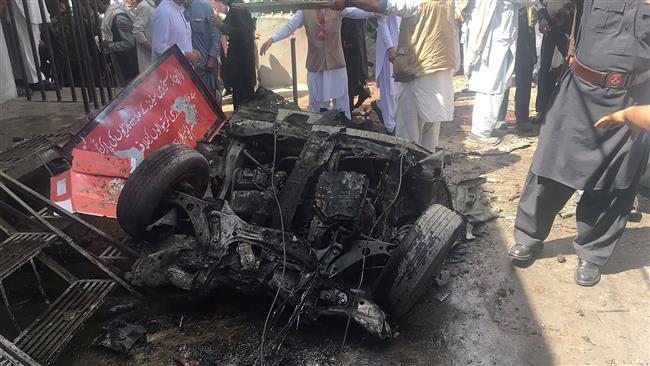 Iran has censured a terrorist bomb blast near a mosque in Pakistan, saying “steely determination” and “collective cooperation” are required to eliminate terrorism and extremism at both international and regional levels.

Iranian Foreign Ministry Spokesman Bahram Qassemi said on Friday terrorism would be eradicated in the region and across the world only through steely determination to stop financial and spiritual support for terrorism and extremism.

He added that a successful campaign against the scourges also requires the engagement of all countries in a mechanism based on “collective and honest” cooperation.

“So long as some individuals deploy the rhetoric of bullying, carnage and massacre instead of logic and dialog as a means to achieve their own ominous goals and a few countries in the region [also] see their interests in the spread of insecurity, terrorism and extremism, there is no hope for uprooting this cancerous tumor,” he added.

He expressed confidence that those who are spreading violence and terror would pay a heavy price for their criminal acts.

The Iranian spokesman expressed his sympathy with the Pakistani government, nation and the bereaved families of the victims.

At least 22 people were killed after a powerful bomb attack targeted a mosque in the northwestern Pakistani city of Parachinar on Friday.

The explosion took place as Muslims gathered for Friday prayers near the women’s entrance of the Shia mosque in the busy Noor market of Parachinar, the capital city of Kurram Agency in the Federally Administered Tribal Areas in Pakistan, which borders Afghanistan.

Jamaat-ul-Ahrar, a breakaway faction of the Pakistani Taliban, claimed responsibility for the attack. The spokesman for the militant group, Asad Mansoor, said in a statement that it was carried out by one of its members, Abul Durda.

Parachinar has been racked by violence in the past. An explosion in Parachinar in January left 25 people dead and dozens more injured.

The tribal area is considered to be one of the most dangerous regions in Pakistan.

Kurram Agency borders three Afghan provinces and was once a Taliban stronghold and the main route for cross-border militant activity.