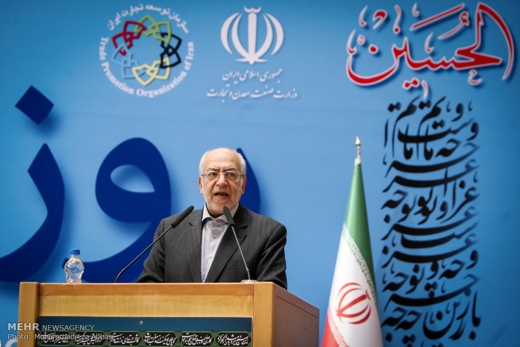 Industry Minister Mohammad Reza Nematzadeh has said that Iran has set a target of $190b in exports for 2025.

The minister of industries, mines and trade has said that Iran needs to reach out to foreign managers to promote exports and capture international markets.

Mohammad Reza Nematzadeh made the comment in a ceremony to mark National Exports Day on Tuesday and added that like the foreign coaches the sports sector asks to come over to steer different sporting teams, the country should hire foreign managers for the economy sector if it seeks to develop its exports and have a share of the global markets.

Alef.ir on October 20 published a report on Nematzadeh’s remarks in the ceremony. The following is the translation of what else the minister told exporters:

Export is not an option; rather, it is a must for the country if it wants to create jobs and boost its economy. In the twelve months to March 2015, Iran posted a 20 percent increase in non-oil exports, but the export figures dropped in the following six months due to the prolongation of the implementation of the Joint Comprehensive Plan of Action (JCPOA), as well as other factors such as insecurity in target markets and neighboring countries, and a slump in global crude prices. We hope things change and the country can raise its non-oil exports in the six months to March 2016 thanks to [better access to] target markets.

Iran stands 51st among 229 countries which export goods and it ranks 60th among 152 service exporting countries. Oil has a share in Iran’s exports; excluding oil, Iran’s conditions [export-wise] would be worse.

Iran accounts for %0.34 of [the world’s] exports of commodities and %0.18 of services exports. Iran’s exports of goods and services are projected to climb to $190 billion by 2025 [under the 20-year Outlook Plan], up from the current $63 billion.

Iran’s goods and non-oil export per capita is $800. The figure should rise to $2,000 according to the Outlook Plan. If Iran fails to reach that target, it will lose its status as an exporter.

Iran needs to fully tap into the principles of the resistance-based economy in all sectors. Such an economy has taken into account what is needed in all sectors to develop exports.

Amendments to the Act on Adjusting Part of Government’s Financial Rules were ratified last year [March 2015]. [The government has approved] a number of tax incentives for investment and joint ventures with foreigners, among them a 50 percent tax cut to foreign investors. We hope 20 percent – at least – of the products of such joint ventures will be exported overseas.

To develop exports, the government has also put on its agenda efforts to facilitate the import of raw materials and set preferential price for exports. To that end, the National Development Fund is expected to deposit money into agent banks, which will in turn grant loans to exporters. This is underway now.

Part of the money [to be granted as loans to exporters] has been deposited into the Bank of Industry and Mine and the ECO Trade and Development Bank.

For years, Iran has easily exported handicrafts, dried fruits, fruits and fresh greens, but it needs to get more involved in the science-based sector for which it should exploit the potential of efficient managers.

Certain governmental agencies stop exports to supply the [domestic] market. This is not acceptable. Exports should not stop even if an item is in short supply on the market for a short period, and this is stressed by the country’s Fifth Development Plan as well.

In foreign investments, exports should be taken into account. As a proposal, we can say that 30 percent of what is produced from the initial investment should be exported.

The country also needs to support large-scale companies and industries if it seeks to break into export markets. Macro- and small-sized institutions cannot make it to the international markets and compete there. Investments should be funneled into big, reputable institutions.

We have to bolster marketing management and expertise. I have suggested some companies bring in foreign managers. Some have done so and welcomed the results. Nothing goes wrong if we tap into the expertise and knowledge of well-experienced foreign managers.

Like the sports sector which invites foreign coaches, we, in the economy sector too, need to bring on board foreign economy managers.

Carpet exporters cannot send their items to overseas markets on their own. That’s why officials should step in and give priority to carpet exports. Some $200 million has been deposited into the Export Guarantee Fund of Iran (EGFI) and it can pave the way for efforts to facilitate exports in the country.