A senior Iranian commander has warned that Iran is capable of targeting the enemy’s strategic interests across the globe in case of any act of aggression against the Islamic Republic.

A senior Iranian commander has warned that Iran is capable of targeting the enemy’s strategic interests across the globe in case of any act of aggression against the Islamic Republic.

“We can target the crucial interests of the enemy at any location in the world if it harbors any ill intention,” said Deputy Commander of the Islamic Revolution Guards Corps (IRGC) Brigadier General Hossein Salami addressing worshippers at Tehran’s Friday prayers.

Iran’s air defense can destroy the enemy’s aircraft at any altitude and the country’s drones are equipped with state-of-the-art operational capability, he added.

“We have accumulated and built up so much power that even if all of the enemy’s options unfold at the same time, it will bring them (enemies) nothing but defeat and disappointment,” the general underlined.

In a commencement address at the US Military Academy on Wednesday, Obama said there is an opportunity to resolve disputes over Iran’s nuclear energy program but reiterated that Washington reserves “all options” against Iran, alluding to military action.

The Iranian commander also called on the Iranian nuclear negotiators to steadfastly uphold the Iranian nation’s rights in the course of the ongoing talks with the P5+1.

Iran and the six world powers have been discussing ways to iron out differences and start drafting a final deal that would end the West’s dispute with Iran over the country’s nuclear energy program.

Deputy Chief of Staff of the Iranian Armed Forces Brigadier General Masoud Jazayeri has also warned that any US act of aggression against Iran will sound the death knell for Israel and see war engulfing the United States. 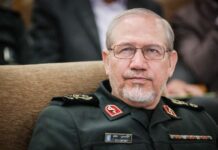