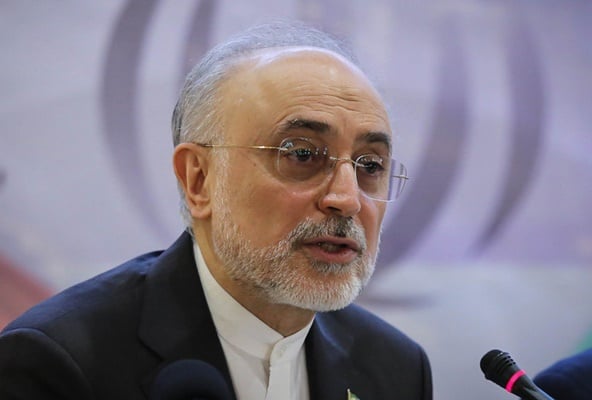 Iran’s atomic chief says the country is able to raise its uranium enrichment capacity to 180,000 separative work units (SWUs) in 10 months if the Iran nuclear deal does not remain in place.

Ali-Akbar Salehi, the head of the Atomic Energy Organization of Iran (AEOI), made the comment in an interview with state TV conducted at a centrifuge assembly hall of the Martyr Ahmadi Roshan Enrichment Facility in Natanz, central Iran.

“At the moment, this place has a capacity of [producing] around 60 machines per day, which means the halls to be created in 10 months’ time will be able to ramp up [uranium enrichment capacity] to 190,000 SWUs,” Salehi said.

“We will assemble new centrifuges to the extent allowed under the JCPOA, and even if we have [an enrichment capacity of] 180,000 SWUs today, the condition will not be prepared and there is not enough raw material for this extent of enrichment.”

“After the conclusion of the JCPOA, we were able to add around 400 tonnes of raw material to the 550 tonnes we already had,” the AEOI chief noted.

He further underlined that Iran tries to raise its capacity of producing raw material in parallel with its uranium enrichment capacity.

“If our [uranium enrichment] capacity rises to 190,000 SWUs, each year we will need 300 tonnes of uranium to be used as feed [for enrichment], and we don’t have that amount at the moment, but we are making every effort to be able to increase our raw material production capacity in the country to 300 tonnes in the coming years,” Salehi said.

“We moved forward with the prediction that nuclear talks would break down or would be violated, and the Leader of the [Islamic] Revolution had also told us not to trust the United States,” said the nuclear chief.

“This hall (the industrial shed where the TV interview was being conducted) had been constructed before the JCPOA was signed, and we equipped this abandoned industrial shed back in 2014,” he noted.

“This industrial shed has several pavilions; for example, rotors are tested at different speeds at these pavilions,” Salehi said.

He said the halls are where centrifuge parts are tested.

“All necessary tests for rotors and other parts used in centrifuges are tested in this hall. Also, there is a bigger hall under construction where it will be possible to fully control 60 centrifuges,” he added.

“Since the Supreme Leader issued the order [to make preparations to increase uranium enrichment capacity to 190,000 SWUs,] work has been underway round the clock to make these halls operational. A lot of work has been done over the past 48 hours, and we hope all of these halls will become ready and enter service in a month’s time,” Salehi said.

He further noted that the current industrial sheds are suitable for IR2, IR4 and IR6 centrifuges “which are among our modern centrifuges,” adding that an extension hall is to be constructed which will be big enough to accommodate IR8 centrifuges as well.