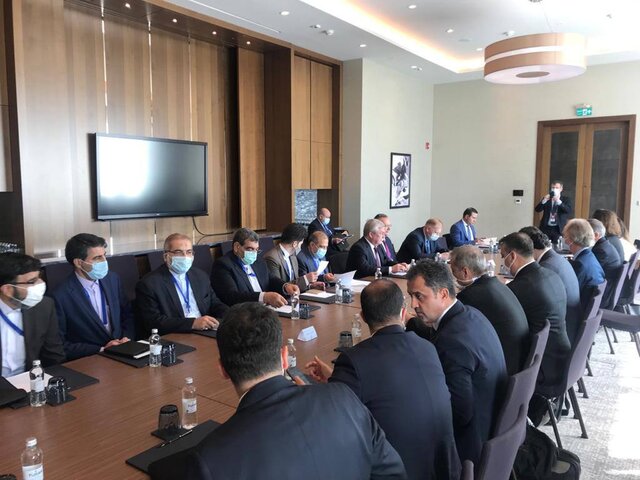 The Islamic Republic of Iran has objected to the US sanctions against the Syrian people, calling for the lifting of sanctions as soon as possible.

On the second day of the 16th round of Astana talks in Nur-Sultan, Kazakhstan, the delegation of the Islamic Republic of Iran, headed by Ali Asghar Khaji, a senior advisor to the Minister of Foreign Affairs, held meetings with the Lebanese and Iraqi delegations, the United Nations High Commissioner for Refugees (UNHCR), the representative of International Committee of the Red Cross.

In these meetings, the delegation of the Islamic Republic of Iran discussed the latest situation and conditions in Syria, including holding the country’s elections, Syrian refugees and the situation of refugees in this country, as well as sanctions and other issues.

The meeting of the working group on the exchange of prisoners, missing persons and detainees was also held with the participation of the guarantor states in the Astana process. In this meeting, Mir-Massoud Hosseinian, Director General of the Middle East and North Africa of the Iranian Ministry of Foreign Affairs, expressed the views of the Islamic Republic of Iran in this regard and emphasised ethical-human principles and called for speeding up these efforts.

The delegations of Turkey, Russia, the United Nations and the Red Cross also presented proposals on the progress of the process and their latest performance reports.

At the end of the bilateral and multilateral talks, the final meeting of the Astana process was held and the participants agreed on and approved the communique of the summit.

Speaking to different news agencies, including Russia’s Tass news agency, and Russian and Syrian journalists, the senior adviser to Iran’s foreign minister talked about the recent successful presidential election in Syria and stressed the people’s right to sovereignty.

In this press conference, Khaji elaborated on the issue of the return of internally displaced persons to their homes and stressed the need to confront any separatist and terrorist moves in Syria.