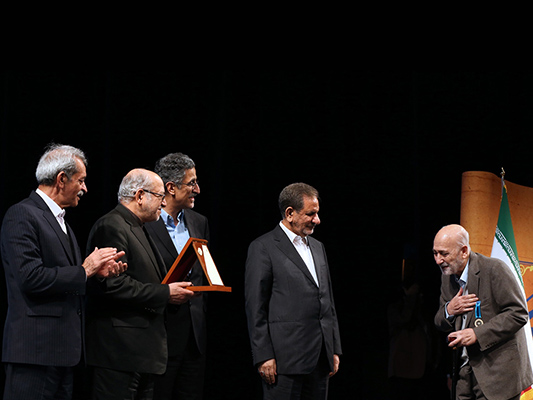 In a ceremony attended by Iran’s First Vice-President, 23 individuals were awarded the “Amin al-Zarb” badge of entrepreneurship for their distinguished role in fostering economic empowerment.

Tehran Chamber of Commerce, Industries, Mines and Agriculture (TCCIM), founded more than a century ago, hosted the event at Tehran’s Vahdat Hall to extol excellence in entrepreneurship, celebrate lifetime achievements in manufacturing and business, and recognize individuals whose contributions have been key to economic progress, reports the official news website of TCCIM.

Gholamali Soleimani who founded the dairy and food company Kalleh, Morteza Soltani, a prominent figure in the foundry industry, and Iran’s electricity industry pioneer, Mohammad Mehdi Fanaei, were among the award recipients.

Asadollah Asgaroladi, with a history of six decades of industrial work, and other outstanding players in the cement, stationery, livestock, milk, and tea industries, among others, were conferred the honorary badge because of their years of distinguished work.

The prize is named after Mohammad Hossein Amin al-Zarb, an immensely influential Iranian businessman who was a pioneer in bringing electricity to Iran and founded the Assembly of Merchants in 1926, which later morphed into what is now the Tehran chamber of commerce.

Amin al-Zarb held the office of the chamber’s director from the time of its founding up to his death in 1932.

Khansari, the TCCIM chief, had earlier noted that plans are underway to raise the value of the national ‘Amin al-Zarb’ medal to the level of Nobel Memorial Prize in Economic Sciences.