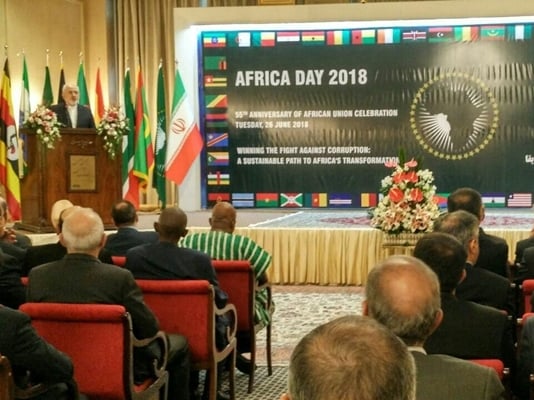 Iranian Foreign Minister Mohammad Javad Zarif says the Islamic Republic is resolved to enhance its cooperation with African countries as it attaches great importance to its ties with the African Union.

The Iranian top diplomat made the remarks in a Tuesday address to a ceremony to celebrate the 55th anniversary of the African Union’s establishment.

Zarif, who was attending the ceremony as a special guest, offered congratulations to African nations and governments on the anniversary of the AU’s establishment.

The Iranian foreign ministry is happy to be hosting the ceremony to mark the Africa Day, which is the pleasant day when Africa got rid of colonialism, he noted.

“Some African countries made sacrifices to help their other brothers and sisters achieve political independence,” Zarif added.

“This indicates their strong commitment to each other and the cause of promoting human culture and raising hopes for the progress of African people at all human levels,” he noted.

“Based on its cultural values and Islamic teachings, the Islamic Republic of Iran has joined the Africans’ celebration of their great success, and accompanies the African nations and governments in this joy,” Zarif said.

He also noted that the African people and governments have shown they make relentless efforts to improve their lives.

“In this path, they use all their facilities and capabilities to gain independence and economic development,” he said, highlighting the significance of Africa’s ties with other regions in the world and its important and special role at international organisations.

Africa’s progress in the past years has been admired by all observes, he noted, adding that several elections have been held peacefully in this continent, many regional conflicts settled through local mediation, and long steps taken for development.

He also pointed to the AU’s stances as the representative of African countries, saying, “The AU’s reactions to global and regional developments, including its support for the Iran nuclear deal, its condemnation of the use of chemical weapons, its emphasis on concerns over the US’ withdrawal from JCPOA, which violated the rules and regulations of international law, and its logical reaction to those insulting the African people show that the African nations and countries and the AU have great political understanding.

“Today we see that Africa is active in all fields to meets its needs. They seek to provide equal social opportunities for men and women, improve their economic conditions, raise the standards of living, help establish peace and stability, and promote democracy in the Continent,” he noted, praising the valuable and great measures already taken to fight against corruption.

He further reminded the participants that Iran has always stood by Africa, and attaches special importance to the continent in its foreign policy.

“My recent visits to several African countries and the meetings of joint committees and business conferences held with the countries I visited are witnesses to efforts we made to expand our relations with Africa,” he said.

“We seek to promote our business relations with Africa, and the Economic Department recently established at the Iranian Foreign Ministry attaches special importance to Africa,” he concluded.

Africa Day (formerly African Freedom Day and African Liberation Day) is the annual commemoration of the foundation of the Organisation of African Unity (OAU) (now known as the African Union) on 25 May 1963. It is celebrated in various countries on the African continent, as well as around the world.

Africa Day continues to be celebrated both in Africa and around the world, mostly on 25 May, although in some cases these periods of celebrations can be stretched out over a period of days or weeks.