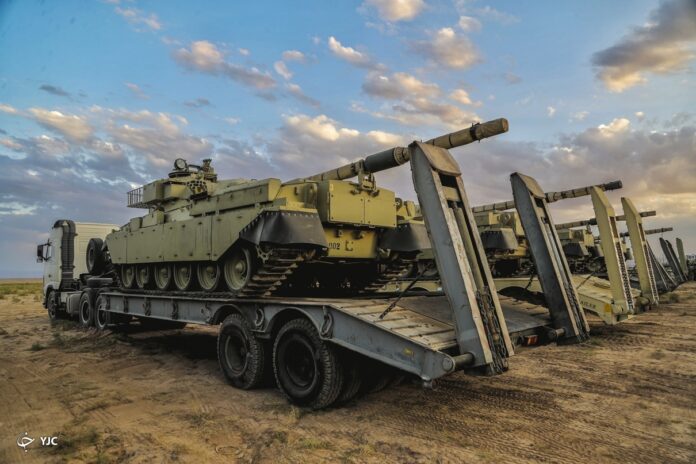 Armored, artillery, drone, and electronic warfare units of the Ground Force with support from Army Air Force helicopters are taking part in the exercises.

During the first phase of the maneuvers on Friday Morning, the UAV unit carried out a general reconnaissance of the drill zone, and after sending pictures to the command post; the 25th Rapid Reaction Brigade transported its forces to the area with helicopters and exercised an operation.

Later, the artillery units opened heavy fire on pre-determined targets, and the armored units carried out a strike operation.

During the exercises, two new anti-tank weapons along with several other achievements of the ground forces will be unveiled.

The Commander of the Iranian Army Ground Force Brigadier General Kiomars Heidari said on Friday that the drills have a message for the Daesh terrorist group and the Zionist regime.

“They (Daesh terrorists) and the Zionists must know that they have no place in the region and that the armed forces of the Islamic Republic of Iran are particularly vigilant about them and will confront them wherever they see them,” the general warned.

The commander of the Iranian Army Ground Force has said that the exercises are held with detailed planning and are aimed at testing weapons, military equipment and assessing the combat readiness of the armed forces in northwestern border areas.