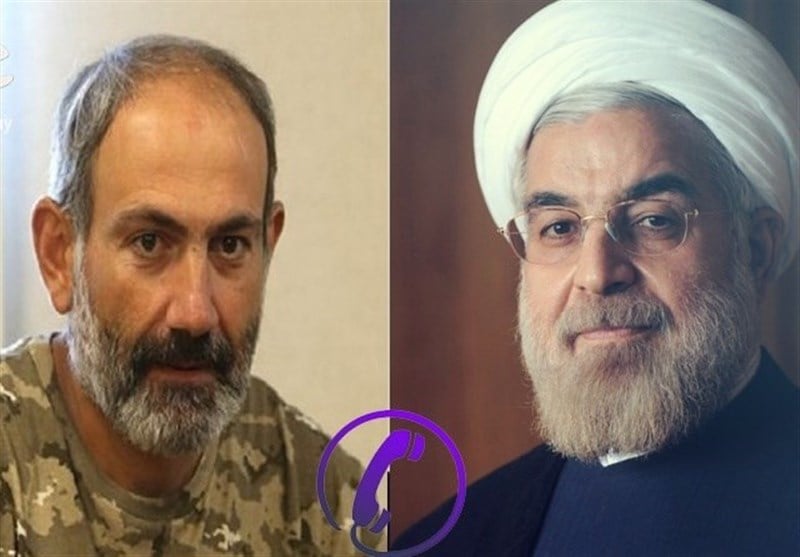 Iranian President Hassan Rouhani, in a telephone conversation with Armenian Prime Minister Nikol Pashinyan on Sunday, hailed the growing ties between the two countries and reiterated that the Islamic Republic is determined to boost relations with neighboring countries.

In the phone call, Rouhani stressed the need for more efforts to tap the existing capabilities and potentials in Iran and Armenia to deepen the bilateral relations in various areas.

“The Islamic Republic of Iran is determined to expand relations and cooperation with its neighbors,” he added.

Rouhani also pointed to US President Donald Trump’s recent move to leave the 2015 nuclear deal, known as the Joint Comprehensive Plan of Action (JCPOA), and said the unilateral action by the US was against international regulations and the United Nations Security Council Resolution 2231.

He added that the Islamic Republic would remain committed to the JCPOA provided that the remaining parties guarantee its interests.

The Armenian premier, for his part, said his country attaches great significance to the development of friendly relations with Iran based on mutual respect.

The JCPOA guarantees peace and stability in the region, Pashinyan said, stressing that Armenia has never been, nor will ever be, involved in any move against Iran.

In a speech from the White House on Tuesday, Trump accused Iran of sponsoring terrorism and seeking nukes before announcing the US withdrawal from the nuclear accord.

Following the controversial decision, Rouhani said Iran weighs plans to remain in the agreement with the other five parties, namely Russia, China, Britain, France and Germany, provided that the remaining JCPOA parties ensure its full benefits for Iran.

In an open session of the Iranian Parliament on Wednesday morning, a number of lawmakers set fire to the JCPOA and to the US flag in a symbolic gesture of protest.