Iran Front Page
Home Politics Foreign Policy Iran and Russia Standing by Each Other in Fight against Terror: Deputy... 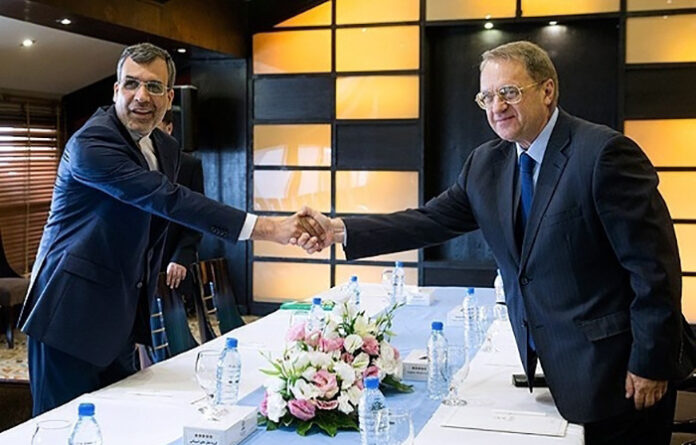 In a recent meeting in Tehran, Iran’s Deputy Foreign Minister for Arab and African Affairs and Russian President Vladimir Putin’s envoy to Tehran discussed Iran-Russia cooperation in the ongoing fight against terrorism and the latest developments in the Middle East.

According to a report by IFP, the Russian president’s special envoy to the Middle East, Mikhail Bogdanov, arrived in Tehran on Monday and met Iran’s Deputy FM Hossein Jaberi Ansari.

During the meeting, Jaberi Ansari highlighted the significance of continued consultations between the two countries on regional developments, saying that Tehran attaches great importance to its ‘strategic’ ties with Moscow.

“The two countries are standing by each other in the battle against terrorism and extremism, and should have mutual cooperation in highest levels on political issues as well,” he noted, according to a Farsi report by ILNA.

“We are faced with a wide variety of paradoxes in the Middle East, and should endeavour to devise a comprehensive plan [to resolve regional issues],” Jaberi Ansari noted, adding that promotion of cooperation with regional states is a prerequisite for such efforts.

He further referred to the developments in Yemen, and stressed that the formation of a National Salvation Government in the Arab country is not in contradiction to Yemen peace talks.

“The success of UN’s roadmap [for Yemen] hinges on adoption of proper policies by Saudi Arabia,” he went on to say.

“Future of Yemen is decided by its own people, and regional players should help the two sides of the conflict hold serious intra-Yemeni talks,” the Iranian official added.

Jaberi Ansari also pointed to the recent developments in Lebanon and the election of its president and prime minister after months of power vacuum.

“The developments in Lebanon showed that a deal between opposing sides with the aim of maintaining national interests is the solution to problems and paradoxes currently gripping the Middle East.”

Bogdanov, for his part, criticized the West for imposing sanctions on Syria and at the same time claiming to advocate residents of Aleppo.

The visiting Russian diplomat took a swipe at the West for its paradoxical stances on Syria, blaming the economic woes and harsh living conditions in Syria on the Western sanctions and an ongoing crisis, now in its sixth year.

As regards the developments in Syria’s northern city of Aleppo and Russia’s military help for the Syrian government in the fight against terrorism, Bogdanov underlined that “all terrorist elements must be evicted from Aleppo.”

Lavrentiev met with President Hassan Rouhani in Tehran on Saturday and delivered the message in the form of a letter, as confirmed by the Kremlin.

The Kremlin said on Monday that Russian President Putin’s point man on Syria delivered a “confidential” letter penned by the Russian head of state to Iranian President Rouhani.