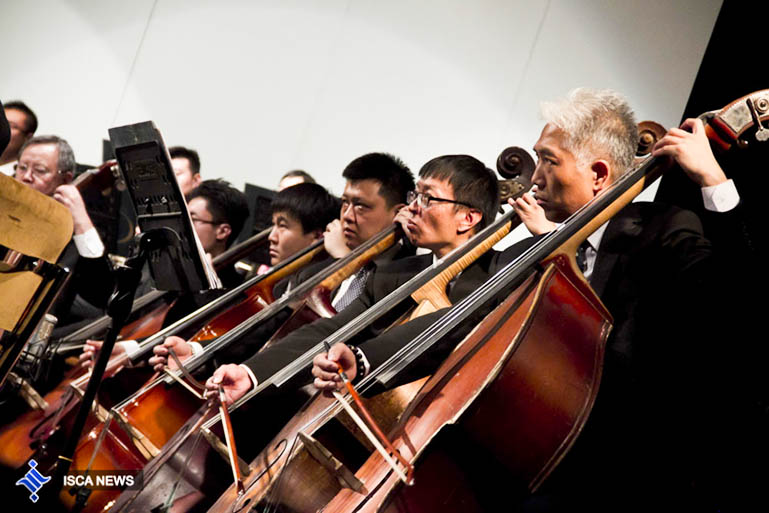 A joint concert by the Tehran Symphony Orchestra and the China Philharmonic Orchestra is hoped to open a new chapter in cultural ties between the two ancient nations.

The Iranian orchestra went onstage on the second night (August 14) and performed Shahrzad with the Chinese performing Antonin Dvorak’ [New World] Symphony No. 9.

The conductor of the Chinese orchestra said that the China Philharmonic Orchestra and the Tehran Symphony Orchestra are excellent on stage and comparing the two is not reasonable.

The Iranian Students’ News Agency (ISNA) on August 12 published a report on remarks by Long Yu, the Chinese conductor after meeting with members of the Tehran Orchestra at Vahdat Hall followed by his Iranian counterpart Ali Rahbari’s comments. The following is the translation of that report:

Prior to our trip, we were very excited. In school, we learned about Iran in history books. We greatly respect Iran’s culture and history.

Today our dream came true when our plane touched down in Tehran. We hope we can learn many things from Iranian traditions and music.

Mr. Rahbari and I view music as a common language. In fact, it is an international language which helps us have better ties and learn from each other.

We are interested in Iran. I’ve had such a dream for long. I used to work with a Chinese orchestra whose members were Muslims.

When I was studying in Germany, I heard about Mr. Rahbari. He is famous and I wanted to work with him. I’m happy I’m working with him now. I want our friendship to continue. Iranian musicians are great and this is just the beginning for us. We hope to host Iran’s orchestra in China.

Professional musicians from China and Iran will perform tough pieces together. Thanks to Mr. Rahbari’s efforts, the makeup of the musical ensemble is excellent. Tehran remarkably excels at high tempo.

We will perform eastern pieces [in addition to western pieces] in our concert, for instance “Butterfly Lovers” is a Chinese piece and “Shahrzad” which is eastern, with a capital E.

The Chinese performers are all young and this shows the young generation’s interest in culture. China has good economic ties with Iran. We should improve our cultural ties too.

China’s name reminds everybody of trade, but our country – like yours – is rich in art, culture and spirituality.

Today is a good day. For the first time ever, Iran and China will perform onstage together. […] One day a gentleman came to me and said, ‘We have a Silk Road tour. We want you to conduct the China Philharmonic Orchestra.’ And I accepted the offer. […]

The following are images issued by various news agencies of the event: