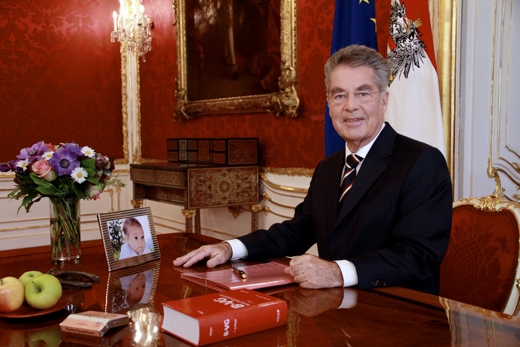 President Heinz Fischer has said in an opinion piece that the number of Austrian tourists visiting Iran is expected to increase dramatically in the years to come. Austrian President Heinz Fischer has said that his country’s companies are willing to get into Iran’s market and that his Iran trip will help bring the two nations closer together.

Iran newspaper published an opinion piece in Farsi by the Austrian president on September 7, the same day he arrived in Tehran heading a big economic delegation to explore ways of developing bilateral ties in the post-sanctions era. The following is the translation of the piece in its entirety:

I will be in Iran from September 7 through September 9 at the official invitation of the esteemed President Dr. Hassan Rouhani. Accompanying me during the visit will be a high-ranking economic, scientific and cultural delegation. The invitation made me very happy. It will be my second visit to Iran. The first time was back in 2000 when I was president of the National Council (the lower house of the Austrian parliament).

Ties between Austria and Iran date back 160 years. Back then, professors teaching medical science and mining in Austrian universities came to Iran at the invitation of the then prime minister Amir Kabir, who is widely remembered as a great man these days.

These professors helped establish Tehran’s first science school: Dar ul-Funun. Austria set up its first mission in Tehran in 1872. Iran followed suit six years later. Today many physicians of Iranian origin are practicing medicine in Austria. These doctors have a high status in Austrian society and play a prominent role in my country’s healthcare system.

Since the 1960s, on average more than 1,000 Iranian students have been studying in Austrian universities each year. Presently, that number is close to 1,500. What stands out about Iranian students is that they are very hardworking and goal-oriented.

Hosting talks between E3+3 and Iran in Vienna was a valuable experience for Austria. I welcome the positive conclusion of the nuclear talks and arrival at a Joint Comprehensive Plan of Action. It was once again proven that through steadfastness, positive thinking and determination to reach an agreement within a diplomatic framework, talks can produce the desired results. I hope all parties will comply to the letter with the envisioned roadmap.

All of us should made efforts to create a WMD-free region in the Middle East and Near East. Austria will support international efforts toward that goal. Iran and 113 other countries have supported Austria’s Humanitarian Pledge initiative which warns about the catastrophic consequences of nuclear weapons, denounces them and calls for their elimination.

It is hoped that positive conclusion of the nuclear talks is followed by solutions to bloody conflicts in Syria, Iraq and Yemen. As a top regional power, Iran can play an important role toward that goal.

Many Austrians find the cultural heritage and age-old civilization of Iran very interesting. The number of Austrian tourists visiting Iran is expected to increase dramatically in the years to come. The Austrian tourism industry and its higher education institutes are at the ready to share their knowledge with the Iranians.

For many years, Iran was Austria’s second biggest trade partner outside Europe. Iran is a country with rich natural resources and an educated population. For thousands of years, Iran has been the confluence of major trading routes.

In the Iran-EU trade and investment conference which was held in Vienna (July 23-24, 2015), interesting investment methods were discussed. Prior to my visit, representatives from Iran and Austria explored ways of future cooperation between the two countries. Now, a roadmap will be worked out to implement plans in areas such as energy, technology, the environment, tourism, infrastructure, transportation, forestry and disaster management.

Austrian companies are interested in working with Iranian firms to tap into the potential of Iran’s huge market. I am sure this visit will help bring the two countries closer together. I am looking forward to this visit.