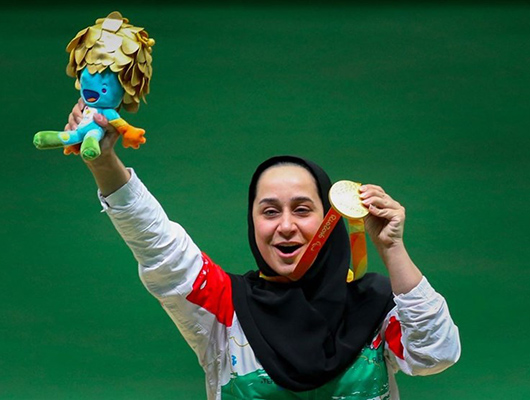 A few days before the start of the World Paralympic Championships in Sydney, the website of the International Paralympic Committee chose an interesting nickname for the Iranian shooter Sareh Javanmardi, calling her “The Pistol Queen”.

The Iranian athlete is one of the 10 shooting athletes introduced by the World Shooting Para Sport as the Ones to Watch ahead of the 2019 World Championships set to begin on October 12 in Sydney, Australia.

According to the website of World Shooting Para Sport, Javanmardi and the other nine athletes have the potential to make headlines at the sport’s biggest competition.

“Pistol queen is a three-time world and two-time Paralympic champion. Her most recent achievement was double gold at the 2018 Worlds, winning both her P2 (women’s 10m air pistol SH1 and P4 (mixed 50m pistol SH1) titles in comeback fashion,” reads the website.

Sareh Javanmardi, born in 1984, is an Iranian Paralympic shooter from Shiraz. She is the first ever female gold medallist from Iran to win in the shooting category of the Paralympics Games.