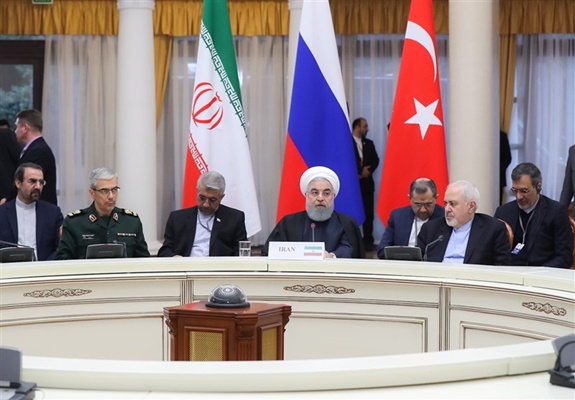 Iranian President Hassan Rouhani says the international community ought to help start the reconstruction of Syria, as the violence in the war-torn Arab country is reducing.

“The International community must help the Syrian people in returning the displaced and refugees to their country and starting the reconstruction of Syria,” he said.

Rouhani made the statement in an address to a trilateral meeting in the Russian city of Sochi on Thursday, dedicated to discussing latest developments in the country.

The one-day meeting also aims to review the outcome of the Astana conference on the Syria peace process, as the seven-year conflict in the country is moving toward an end.

Rouhani, Recep Tayyip Erdogan and Vladimir Putin will also discuss the fight against terrorism and cooperation for reconstruction of Syria.

Rouhani said the anti-terror fight in the country must continue until the remaining terrorists are eradicated.

“The fight against all terrorist groups in Syria must continue until they are eradicated,” he said.

Rouhani said governments across the globe must refrain from supporting terrorists in the country.

“Terrorists must not feel safe in this country or any other place across the globe, and their supporters must not think they can use the terrorism card in internal, regional and international equations,” he said.

US Must Quit Syria

The Iranian president said the US must end its Syria presence as soon as possible, as the country is still supporting terrorists in Iraq and Syria and uses them to its own benefit.

The Iranian president said there are credible reports that the US is assisting the US is moving Daesh terrorists to Syria and Afghanistan.

“The presence of US forces in Syria must end as soon as possible,” he said.

The Iranian president said the world must move to stop Israeli attacks against Syria.

“The international community must deal with the Zionist regime’s arbitrary attacks against Syria,” he said.

Israel has committed numerous air strikes against the Syrian forces in recent years, many of them remain unpublicized.

Before the start of the summit, the Iranian president held separate meetings with Erdogan and Putin to discuss bilateral relations and international developments.