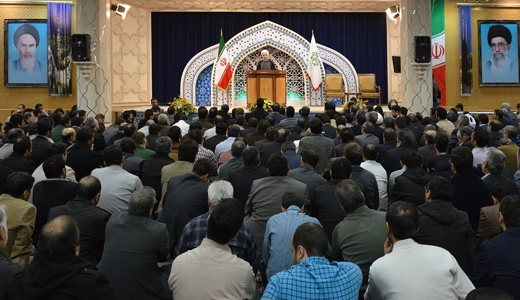 Any measure which stokes division and or interferes with the country's growth amounts to betrayal of national interests and a manifestation of infiltration, the president said.

Despite enemy threats against the Islamic Republic, Iran’s security in a region which is known for its insecurity is matchless, President Hassan Rouhani said in a meeting Tuesday with senior Intelligence Ministry officials as he thanked those who strive to ensure security and tranquility in the country.

The following is the translation of part of President Rouhani’s comments as reported by Fararu.com on December 22:

– “Today we take pride in the security and stability of Islamic Iran in the world; this is what leaders of many countries admit in their meetings with Iranian officials. In the past, many Western countries and groups which harbored enmity against the establishment were bent on identifying Iran as the most insecure country in the region and as the center of insecurity in the world. Today, Islamic Iran is a pioneer of security as it leads the fight against terrorism in the region. And many of the very same countries are reaching out to Iran to help them.

– “Any measure which stokes division and or interferes with the country’s growth amounts to betrayal of national interests and a manifestation of infiltration. The Joint Comprehensive Plan of Action is meant to remove the obstacles standing in the way. The march forward should gather momentum. We need to join forces to secure progress and prosperity and to allow the nation to benefit from such headway.

– “Iran is the only country in the region where people take part in free, fair and competitive elections in a secure atmosphere.

– “The Intelligence Ministry is not affiliated to any party, faction or grouping. Today the Intelligence Ministry has been entrusted with a valuable thing which should be protected in the best way possible. Judgments which are biased and not in line with the letter of law should be avoided. We should not allow some individuals to act against legal criteria simply to advance their personal or factional interests.

– “The Intelligence Ministry has been trusted with the information on members of the public; this ministry will act impartially and in keeping with law in vetting the candidates.”