Imprinted leather, one of the latest findings in the Burnt City 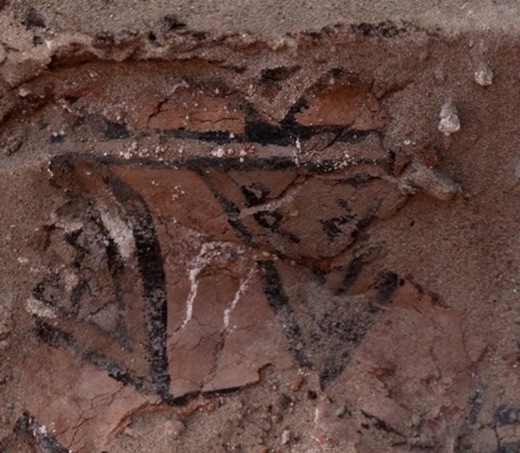 If future excavations confirm the assumptions of archeologists, the theory about the shrinking and final annihilation of the Burnt City should be fully revised.

Recent archeological excavations of the residential area and the cemetery of the Burnt City [in the southeastern Iranian province of Sistan and Baluchestan], have produced numerous finds, including a piece of beautifully imprinted leather, some colorful fabric, a structure belonging to the fourth settlement period of the city, 74 graves, ornaments and so on. The following is a partial translation of a report about the finds the Research Center of Iran’s Cultural Heritage, Handicrafts and Tourism Organization (www.richt.ir) posted on its website on January 12:

Mansour Seyyed Sajadi, who leads the team of archeologists in the Burnt City, said, “Since the imprinted leather is worn out and is about to fall apart, our restoration-of-ancient-items experts are trying to prevent its total destruction.”

He went on to say, “The recent excavations in the residential area of the Burnt City have led the team to discover a special structure sitting at the center of the area which has never been looked for anywhere else in the city.”

“Much to our surprise, in derelict rooms there, we came across a large amount of plain, two-colored and multicolored shabby fabric. Our experts will examine the findings soon, so that measures to restore and preserve them can get underway. Earlier, in the Burnt City, numerous samples of fabric had been dug out. A piece of fabric unearthed in recent excavations is approximately 60 by 40 cm with three colors which is the largest piece ever discovered in the city.”

If future excavations confirm the assumptions of archeologists, the theory about the shrinking and final annihilation of the Burnt City should be fully revised,” Seyyed Sajadi stated.

“Seventy-four graves with 80 human skeletons in an area of 320 square meters have been unearthed and excavations of the cemetery this year have also produced 503 exquisite items such as colorful jars and dishes, precious bronze items and beautifully and meticulously crafted necklaces dug out from the graves.

The tiny beads of the necklaces are just one millimeter in diameter with holes in the middle which are no bigger than 0.3 millimeter. Among the findings, there have been also black and white as well as colorful dishes with lids which are still produced in the province,” the archeologist said.